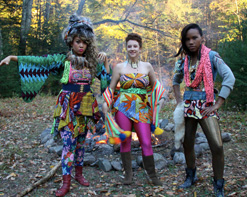 Hello programming friends. It’s Andy Gesner and the HIP crew, here with a wild and saucy clip from three Brooklyn-ites that aren’t afraid to play with fire or fearlessly cross several genres. My M.O. is an all-girl trio that infuses R&B, noisy punk, and 80’s dance to break out of the limits indie-pop has set for them in their brand new single “Bonfire Man.”

Hailing from all points on the globe My M.O. represents New York City’s convergence of cultures at its best. Enki is a singer and rapper from Australia, who handles lead vocals and bass. Katy Walker is a veteran DJ, originally from Texas, who plays keys, contributes vocals and produces their songs. Dion Mac is a Jamaican-born rocker, who shreds guitar and adds to the medley of vocals. Together, they subtly cull their broad range of influences into a tasty indie-pop blend of ethereal beats and saucy lyrics. MTV Iggy has already dubbed these girls as “super women,” as they are as much a live band as they shine in the studio. In fact, these girls recorded and produced their brand new album Bonfire themselves! Only released in mid-July, the record which features the infinitely catchy “Bonfire Man,” has already attracted plenty of devotion from blog critics. The Hidden Mixtape raves that the song “is everything an indie-pop song should be,” while parrotized claims that the combination of disparate styles sounds like a “bridge between worlds.” The band has also received nods from The Fader, Eklektx, and Lost In A Minor to name a few.

The video starts out in the gritty streets of Brooklyn as the girls head to work for their mean spirited boss at a mechanic shop. On their way, which involves cuts of dancing and rocking out, My M.O. develop a new agenda besides music – to steal their employer’s car and ride off with it into nature. They hop into the truck and speed for the mountain side, where the video takes a turn for the much hotter. We mean this literally, as the band gears up in tribal gear and sets every frame ablaze in a giant bonfire. Even their angry boss is overcome by their music and joins in on the drums!

My M.O. is a band on a mission, and this fantastic track will light your fire. We also have copies of Bonfire available for you to take a listen to! We’d love to set up some contests and giveaways, so please reach out to us at your convenience. If you need more info, call Andy Gesner at 732-613-1779 or e-mail us at info@HIPVideoPromo.com.