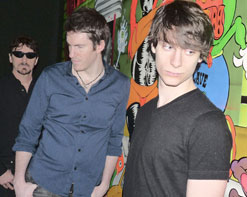 Label:
GFI MUSIC
Video:
"GIVE IT ALL AWAY"
Director:
The Brothers Olson
Add Date:
March 7, 2012

One of the important things often suggested to new bands is to stay modest and be able to manage expectations when getting started. But what happens if your first music video is directed by a pair of Emmy-winning brothers, stars a supermodel straight out of Project Runway, your band includes an indie rock staple and you've already been compared to Coldplay, early Radiohead and even The Beatles? If you're My Plastic Sun, you run with it! This Western New York outfit has had a relatively short existence, but has made quite a splash in that time. Their new video for "Give It All Away" is a perfect visual accompaniment to the lush and grand sound they've crafted and there's no mistake that this is a band that is here to stay!

Even though My Plastic Sun may be a newer group, their pedigree stretches far and wide, which would explain the natural musicianship and ambition of their first EP, appropriately titled My Plastic Sun. Frontman Johnny Cummings cut his teeth and developed his natural charisma onstage with numerous bands in the upstate New York club scene, taking his cues from all the experience he garnered. He's been developing his own songs and sound and waiting until the time was right to perform and record his original music. Enter Roy Stein, veteran of such notable rock acts like New Math and Jet Black Berries (alternative radio darlings), who brings a wealth of knowledge and experience in developing original and memorable acts. Cummings and Stein teamed up and brought their musical prowess together to form My Plastic Sun. Rounding out the group on guitar is twenty one year old "Overhand"Sam Snyder, whose presence in the live show undoubtedly raises the bar even more. Their first self titled EP was entirely self-produced, while being recorded and mixed by Stein at GFI Studios in New York. The end result has been called “An incredibly appealing and strong debut EP.” by LittleLionGirl, as well as a strong debut from a band who I confidently predict will go far.” byListenBeforeYouBuy. So naturally the next step would be to enlist the help of a pair of Emmy winning directors and a Project Runway supermodel to put a visual to your music!

The video for "Give It All Away" is an absolute visual playground, and that's probably an understatement. Johnny Cummings shows off his natural presence by playing the lead role of a man who seems to have everything a guy could want. He has a beautiful female dressed in white at his side, played by Brittany Oldehoff (Project Runway, Season 7) and a literal castle for a home. But when darkness falls, Cummings finds himself succumbing to the temptation of a nighttime visitor at his window, who is also played by Oldehoff, only this time looking decidedly more ill-intentioned in all black. Whether it is a metaphor for falling to temptation, good vs. evil, this much is clear; it gets ugly…. His straying ways cost him the ultimate price, but that isn't the end of the story as we continue to see Cummings looking over Oldehoff, hoping to finally pay penance for his mistakes. Directed by the Olson Brothers, Amariah and Obin, and they leave no stone unturned when presenting this heart wrenching story. Their previous work has garnered them nods from the Emmy Awards, so it's no surprise that the attention to detail and technical proficiency goes a long way towards making this video one of the best you're sure to see this year. Check it out and see for yourself!

We're very excited to be working with My Plastic Sun and their unique and buzz worthy style of music. We're ready and willing to do whatever we can to help get this video into your programming, including getting you hooked up with copies of theMy Plastic Sun EP. If you need more info you can contact Andy Gesner at (732)-613-1779 or email us at info@HIPVideoPromo.com. You can also visit www.MyPlasticSun.com for more information about My Plastic Sun.