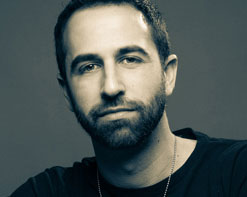 My Silent Bravery is an artist who has taught us that though he has an unmatched knack for crafting stick-to-your-ears songs, he’s not an artist you can pigeonhole. He went rock with “On My Side,” tapped into his acoustic roots with “Forever,” and even dug into the EDM world with his remix of “POV.” It’s only natural that he would expand on this diversity, and go pop though his new choice, “Ride With Me,” which may seem a bit unorthodox to some, but he totally knocks it out of the park.

“Ride Wit Me” was originally released by Nelly on his 2000 release, Country Grammar. The song was a massive hit with its hip-hop, funk, and pop mashup sound. Though it’s generally classified as a rap song, the reality is that it has the core of an exceptional tune with infectious hooks and a chord/melody structure that will appeal to pop fans across the board. It’s the perfect pick for My Silent Bravery to put his own stamp on it.

For an artist with such a diverse repertoire and musical skill set, the recreated “Ride With Me” is the perfect approach to create a video that features different versions of Matthew Wade. Holding down the rhythm is Matty “The Kid,” who is the acoustic-guitar slinging songwriter we’ve come to love. On the other side is “Hype” Matt, representing the more emcee-centric version of Matt. He keeps the moves going and right on cue drops in the key line “Hey! Must be the money!” Front and center is the most well-rounded version of My Silent Bravery, “Mr” Matthew Wade, the bonafide pop star at heart who can captivate the camera and connect with any audience, whether it be one person or one hundred thousand.  According to Mr Wade, his goal as an artist is to inspire people with a fun, positive, and uplifting message. Nelly’s “Ride With Me” has always been a fan favorite at MSB live shows and he wanted to bring this cover to life and share the good times he has singing this song with a larger audience.

The three sides of My Silent Bravery perform in tandem as fast cars, bright lights, and slick graphics fly around them. Meanwhile “Mac Daddy” Matty is calling the shots from the back of his ride. Once again Matt has teamed up with his go-to director, Vassili Shields, who is also flexing his own muscle in terms of creating videos that are perfect fits for any genre he approaches.

We are always excited when we get new music from My Silent Bravery because we know it is always going to keep us on our toes, and “Ride With Me” is no different! We would love to see this video get into your programming, so please don’t hesitate to get in touch to let us know what we can do to make that happen. Call Andy Gesner and the HIP Video Promo team at (732)-613-1779, email us at info@HIPVideoPromo.com . You can also visit http://www.MySilentBravery.com/ for more info.