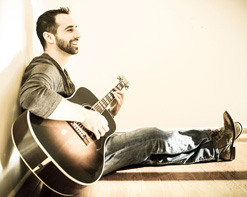 We’ve had the pleasure of working with Worcester, Massachusetts native Matt Wade- known to most as My Silent Bravery- on several videos over the past three years, and needless to say we’re thrilled to be partnering with him once again.

My Silent Bravery is nothing if not prolific, with five studio albums, a remix album, and an acoustic album under his belt. Later this year, he’ll release his sixth studio album, Willing To Try. It’s the follow-up to 2016’s Breakthrough, but don’t expect another rendition of the same songs. While previous releases drew comparisons to the likes of John Mayer, Jason Mraz, and Gavin DeGraw, this time, Matt Wade is letting his hair down, breaking from the mold and doing something different. He’s Willing To Try something new, and we think fans are ready to listen.

The first offering from Willing To Try is “Got it Going On”. It’s getting hot around here, and the “Got it Going On” music video, which was directed and produced by Kurt Zendzian at Red Zone Productions, is the perfect way to kick off the summer. A group of attractive, bikini-clad women wash a car, and our male protagonist walks his dog, meeting the ladies at a backyard pool party. The video is full of innuendos, and with a funky bassline, acoustic guitar riffs, and an infectious hook, it’s just revealing enough to make you want more.

Kurt Zendzian (Director) has worked with many big names in the industry including Chuck Norris, AWOLNATION, The Tenors, David Duchovny, Johnny Gill and Marc Broussard but he insists that this by far was his favorite project of 2017. “Working with Matt was a breath of fresh air. It started with a great song and the music video vision followed quickly. After a few meetings, the team agreed that the video needed to be very quirky and upbeat to match the song. I like to think of the music video of a cross between Macklemore and LMFAO had a baby.”

With this video, My Silent Bravery has definitely “Got it Going On”, and we hope you’re Willing To Try adding it in to the mix of your beloved programming! Please contact Andy Gesner and the HIP Video Promo team at (732)-613-1779, email us at info@HIPVideoPromo.com . You can also visit www.MySilentBravery.com for more info on My Silent Bravery.