Myracle Brah “When She Comes Around” 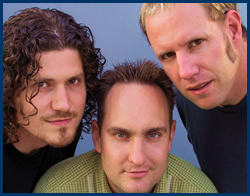 Greetings everyone and here’s wishing you the best of everything in 2005! It’s Andy Gesner and the staff from HIP Video Promo, back to share the latest clip from Myracle Brah with you. The trio has returned with a new album – the appropriately-titled Treblemaker – featuring ten new exquisitely-crafted power pop songs. “When She Comes Around”, the first single, is an early highlight – a bright, sharp, shimmering slice of Sixties-influenced guitar pop. Fans of Badfinger and The Hollies (not to mention newer practitioners of the genre such as The Rooks and The Posies) will find the Myracle Brah sound immediately recognizable and invariably pleasing..

But Treblemaker is hardly singer-guitarist Andy Bopp’s first foray into the power pop subculture. He’s been one of the leading lights of the form for well over a decade, consistently writing high-quality songs and building a cult following that has come to expect the best from him and who’ve rarely been disappointed. Treblemaker is his fifth album with Myracle Brah, and comes on the heels of the critically-acclaimedBleeder. In the mid-Nineties, Bopp fronted Interscope recording artists Love Nut. He’s honed his craft since then, and attained a remarkable level of consistency. He’s one of those guys who seems to effortlessly toss off pop gems, and who regularly fills fifteen-track CDs with classic song after classic song.

That’s not to say that Myracle Brah is a solo project. On Treblemaker, Bopp is joined by empathetic bassist Paul Krysiak and adroit drummer Joe Parsons – musicians who share both his knowledge of Sixties pop and his ability to simulate it. “When She Comes Around” clocks in at a very manageable (and very period-specific) two minutes – but that’s long enough to make room for chiming guitar, a big backbeat, and a sing along chorus worthy of Graham Nash. Krysiak plays a loping, circular bass part, Parsons slams the snare with metronomic precision, and Bopp tears into a solo that’s both melodic and percussive.

The cover of Treblemaker is a wash of deep red and green – but if you inspect it closely, you can convince yourself that you’re looking at an extremely blurred-out guitar. The clip for “When She Comes Around” brings the album art to vivid life and the performance footage closely resembles the “Cult Classic” videos broadcast during the early days of MTV. The bright greens, purples, and reds feel burned onto the celluloid, and analog tape manipulation (or something that looks very much like it) gives the clip the look of vintage video. The colors radiate from the musicians’ instruments – from the oscillating headstock of Bopp’s guitar, and the swinging tips of Parsons’ sticks..

Even as the sugar-coated power pop speeds by, the performance footage is slowed down to half-time. Every motion creates stop-time doubles, or visual echoes – a swoop to the microphone or a swing of a six-string is followed in slo-mo by many mirror images of that action. Bopp superimposes footage of one bandmember atop another, and one instrument over the next. The effect is suggestively disorienting: as one shot bleeds slowly into the next, the bright, frantic music blares behind the glacially moving group.

As always, it’s a pleasure to get to work with our friends Jim McGarry and Matt Smallwood at Rainbow Quartz, and we have a great contest lined up for their most recent videos. Any programmer who adds the Myracle Brah “When She Comes Around” clip, or the companion Rainbow Quartz video, Denise James’ “Love Has Got Me Crying Again” during December or January will be automatically entered into a drawing to win the entire Rainbow Quartz current catalog, which includes releases by Rock Four, Outrageous Cherry and The High Dials. In addition, each programmer who enters will receive a Rainbow Quartz prize package including Rainbow Quartz posters and other cool stuff. The drawing will take place on January 22, 2005 If you need more info call Andy Gesner at 732-613-1779, or email info@HIPVideoPromo.com.