Nahko And Medicine For The People “San Quentin” 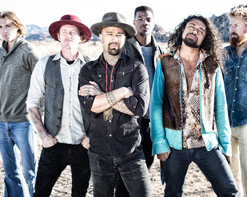 Nahko, an Oregon-native born a mix of Puerto Rican, Native American, and Filipino bloodlines considers himself a citizen in service to the planet. Disillusioned by the world around him and inspired by vagabond Americana musicians and storytellers like Conner Oberst and Bob Dylan, Nahko left home as a teenager in search of adventure and self discovery. Armed with stories, a guitar, and a fierce set of ideals, he set out to bridge the cultural gaps dividing his own psyche.

Along the way he has expanded his circle of likeminded artists, giving birth to Nahko and Medicine For The People, whose mission is to be the motivation and inspiration to make changes, take action and spread awareness. The new single for “San Quentin” is as direct, honest, and thought provoking as everything fans have come to expect from Nahko and Medicine For The People.

Their ever-growing fanbase has heeded their call, rewarding the band with a loyal following that saw their last record, Dark As Night, reach No. 4 on Billboard’s Top Alternative New Album, No. 6 on the Heatseekers album chart, No. 36 on the Top Independent Album chart, and No. 7 in Australia on Triple J’s Top 10 Roots Albums of 2013. Tours with such acts as Michael Franti, Xavier Rudd, SOJA, and Trevor Hall, and on festivals including Outside Lands, Electric Forest, Wanderlust, and Bumbershoot keep spreading the message.

An elder man is brought to the table in an all white room, his hands cuffed behind the chair. As he sits solemnly at the table Nahko sits across from him, at first uncomfortably speaking directly to the man. The conversation continues, and Nahko unveils a key in his pocket. The key to his freedom. It’s soon clear that this is not a visit to cast blame, but rather one to promote forgiveness and healing. In between these shots, Nahko spells out the message “I Forgive You.” The power of closure cannot be underestimated, and in this song Nahko puts the message front and center. The end of the video asks viewers to learn more about bringing music to the incarcerated and learning the difference it can make in a life.

Gearing up for their “Make A Change Spring 2016 Tour” the band, who put on one of the most uniquely spirited shows around, will be on the road for close to a month concentrating mostly in the Midwest, South and Northeast. Fans will get the opportunity to hear songs from the upcoming album HOKA. Please contact Andy Gesner and the HIP Video Promo team at (732)-613-1779 or email info@HIPVideoPromo.com . You can also visit http://www.SideOneDummy.com/ and http://www.Nahko.com/.

Visit Nahko And Medicine For The People