Najjah Calibur “So Far (Been A Pleasure)” 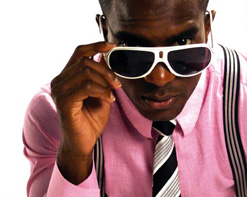 Greetings programmers! We hope you’ve had your dancing shoes shined, because this next video certainly demands that you put them to good use! Najjah Calibur is the next urban pop radio star in the making, and his Juno Award-winning director helmed clip for “So Far (Been A Pleasure)” is here to prove it. Saved by only a few minutes from being born inside an abandoned factory in Canada, Najjah was born to run. An untamed spirit, with two musician parents, his destiny was sealed from an early age as he organized choreography and performed within Toronto’s rich music culture by the time he was 7.

Now Najjah Calibur is ready to hook the world with his sharply honed talents. Today, Najjah hosts a wildly popular radio show titled “Najjah’s World,” where he receives up to 96,000 listeners weekly (with an average of 40,000) and interviews various celebrities, most recently including Canadian Idol judge Farley Flex. Calibur has also been shaking up the airwaves of several Canadian radio stations with his stream of independently released singles, including the most recent “So Far (Been A Pleasure)” release. This particular clip has already been picked up by Much Music for heavy rotation, as well as many various music blogs on the net and even some radio countdowns.

“So Far (Been A Pleasure)” is a perfectly produced urban pop hit. The hooks are heavy hitters on this track. The vocal melodies here are just massive, drawing inspiration from modern pop groups like Black Eyed Peas and classics like Madonna; Calibur stands several notches above most of his competition. Of course, these vocals are traveling your frequency with some of the most phenomenal production value to come from a DIY star. Pop tracks like “So Far” must be executed properly to have impact, and this layered battleship is ready to fire. Laced with just the right amount of ear candy, it never feels overbearing or under-produced, while the constant kick will surely get knees bending and hips twisting.

It’s clear that Najjah Calibur has been working with choreography since his childhood days, as this whole video is fully synchronized as one massive living and breathing world of dancers. Taking place in a college library, Najjah chases the girl of his affection, but as he travels the various spaces of the structure, people around him come to life in dance routine. The atmosphere is simply electric and begs to be watched over and over again. One particular scene that stands out is where Najjah and his lady run up the stairs, passing by drowsy students. However, as they pass each one, they throw their books up in the air and reanimate with Chicago-esque moves. Such delicate performance can only be realized through proper camera work, and fortunately Calibur employed the brains and brawn of Juno Award-winning director Marc Andre Debruyne to accomplish this task flawlessly.

Najjah Calibur is the total package from song and video, to style and image. We are extremely proud to bring you a project of this caliber from an artist who accomplished it on his own terms. This is truly a chiseled diamond waiting to be found, and we urge you to put it on display for your viewers. Be sure to reach out if you’d like an opportunity to interview or receive some Najjah Calibur swag for giveaways by calling Andy Gesner at 732-613-1779, or email info@HIPVideoPromo.com.