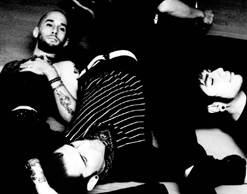 Attention music video specialists! It’s Andy Gesner and the irreplaceable staff from HIP Video Promo bringing you yet another clip that you must check out! Jasten King doesn’t shy away from the term “nancy”. To the Los Angeles singer and songwriter, it’s a badge of honor: shorthand for the long rock and roll tradition of sexual ambiguity and decadent naughtiness that animates his music. At the same time, he’d like to make sure you know that there’s nothing fey or retiring about his approach – like the glam artists he admires, the rock he makes doesn’t hold back on being full and forceful. In KillRadio (a HIP client alumni), the guitarist kicked back at the star system and the power structure; with Nancy FullForce, the political has become personal, and King and his bandmates are proving their politics not only in their words but with their actions.

The recently released Nancy FullForce digital-EP is all they’ve got for us now – but what an EP it is. Here, the brand-new band gives it to us straight: big riffs, bigger backbeat, irresistible choruses, distortion, sass and glamour without losing it’s edge. King has hard-rock grit in his voice, but he’s also the possessor of an arch, knowing Pavement-like sneer. His nuanced performances radiate genial hedonism, deliciously bad attitude, and, most tellingly, a self-awareness that borders on self-deprecation.

Nancy FullForce drummer Duke shared Jasten King’s tenure in KillRadio – he’s a punk and a provocateur, too, and it’s his tight snare and rough kick that puts these songs in motion. On bruising tracks like “Regret Nothing” and “Alzabenet”, Duke and his creative partner demonstrate their tightness and their hard-rock chops with a vicious, take-no-prisoners sound reminiscent of Death From Above 1979 or Rocket From The Crypt. Lead single “Dead & Alive” is probably the catchiest thing on a super-catchy EP, but don’t call it pop – it begins with cowbell, a slamming guitar-riff, and a hellacious shriek and it only gets more raucous from there.

Even when he isn’t rocking Southern California with Nancy FullForce, Jasten King doesn’t stop expressing himself. The multitalented frontman is an in-demand deejay as well, spinning everything from Los Angeles’ hugely successful street festival, Sunset Junction, to being Chi Chi La Rue’s exclusive choice at the notorious (and sexually adventurous) rock and roll party, Dirty Deeds, in West Hollywood. He’s a video artist, as well, and has done installations at several Los Angeles events and clubs. So King knows a thing or two about matching sounds with moving images, and he gives himself a chance to demonstrate that knowledge in the stripped-down – but extremely artful – clip for “Dead & Alive”.

King’s video concentrates on the rudiments of rock and roll as he knows (and performs) it: vintage instruments of black and chrome, tight clothing, tattooed skin, sweat and energy. Decked out in black, the four members of Nancy FullForce play “Dead & Alive” in front of a simple white backdrop. King never shows us an entire instrumentalist, preferring to give us a quick peek before pulling the camera away. He shoots hands on fretboards, the tattooed back of the guitar player’s neck, Duke’s flailing elbows, and his own partially-unbuttoned top. The lens leaps from musician to musician, capturing something essential about each. But King is a showman first, and he knows that the best way to capture and hold attention: tantalize, tease, dangle details; leave the viewer wanting more.