Nasty Habit “Don’t Bring Me Down” 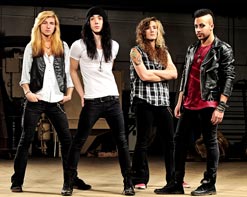 Friday June 18th, 1986: 19-year old Billy Columbo just got out of working in the meat department at Tops Friendly Markets in Rochester, New York. He just got paid $88.22 for the week and he felt rich. The sun was shining, and he had a cold 12-pack of Keystone Light in the back seat of his 82 Chevy Malibu. Windows down on the freeway headed to round up the crew, the Jensen speakers were at capacity cranking 96 WCMF. Motley Crue followed by Ratt and into Warrant. Wind in the hair, loud and proud, no speed limit and headed down to the War Memorial Arena for the Judas Priest and Dokken show that he’d be waiting for what seemed an eternity. Billy felt young and alive. Everything in the world was right at that moment and the music made it even more right because it was about living loud, having fun and enjoying life…

Brothers Kenny and Tommy Ende weren’t alive yet in 1986. As a matter of fact, the brothers from Seneca Falls, NY never heard bands like Van Halen and Tesla until Kenny started playing guitar in his early teens. But somehow they felt what Billy Columbo felt in ’86 when they stumbled upon metal from the 80’s and decided that it would be the soundtrack to their skateboarding endeavors. Kenny started playing guitar before his early teens and by 16 had learned most of Van Halen’s catalog. Kenny and younger brother Tommy were enamored with the heavy guitars and the bombast of the 80’s rock bands, and they quickly knew that this was the style of music they wanted to play. They started Nasty Habit in 2011 after finding 2 kindred spirits in drummer David Jordan and bassist Frank Wheeler who was just 16 at the time. Since then, the band has played hundreds of shows across the US, has released a full-length CD, and were runners-up for the Grammy Gig-of-a-Lifetime contest in 2013. Their fan-base is international thanks to Youtube where it’s easy to find covers of NH songs by bands in South America and beyond.

It’s now 2014 and Syracuse-based Nasty Habit are leaving their teenage years behind (except for 18-year old Wheeler). What they aren’t leaving behind is their desire to bring back a genre of music that embodied a spirit of youth, rebellion and good times for a past generation of rockers that so badly needed it. With their new EP Desperate Times, Desperate Measures, the quartet believes that they have achieved their first goal of putting their own modern stamp on the sound they have embraced. They chose NYC-based rock producer Stacy O’Dell to help them achieve this and the result is loud, over-the-top and in-your-face hooky hard rock that doesn’t sound like it was recorded 20 years ago.

For the new video “Don’t Bring Me Down” the band opens the floodgates of fun and do the same thing their music does: they destroy. The concept behind the “Don’t Bring Me Down” video is not terribly complex or deep, but just Nasty Habit, it’s all about having fun. Set in a rural junkyard the video is a cornucopia of mayhem, destruction, and metal antics. Armed with sledgehammers and baseball bats, the boys of Nasty Habit prowl the yard and go on a rampage that we’ve all been hoping to do ourselves. Spliced in are shots of the band performing with an infectious energy. Hair flips, tongues wag, and sticks twirl as the band blasts through a blistering performance. It’s over the top, it’s energetic, and it’s unapologetically fun!