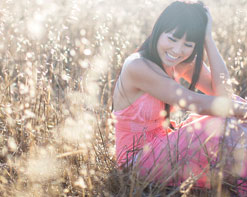 Natalise is an unexpected talent in the music industry. She began her musical journey at a young age and has taken a variety of adventurous paths to find herself where she is today. Piano at three, dance at seven, church choir at eight all led her to the renowned San Francisco Conservatory of Music where she became an accomplished classically trained pianist and vocalist.

While her classical background ​informed her understanding of music, ​Natalise found ​true ​solace in writing songs on the piano​, inspired by her own experiences in love and heartache.​ ​These acoustic songs are the ​genesis for her formation ​of​​​ Natalise + The Sunset Run. Inspired by artists like Coldplay​, ​One Republic,​ Adele, and John Legend,​ she has been creating modernly heartfelt music that has landed on networks like MTV, VH1, Oxygen, and The WB/CW, as well as performing at venues like the ​Warriors’ Stadium (The Arena at Oakland), ​Viper Room, House of Blues, and colleges across the country​, including her alma mater Stanford University, from which she graduated in three years in order to go on tour promoting her first radio release.​

Her newest release, Glimpses of the Sun, is a gorgeous collection of songs that radiate a magnetic softness. Natalise’s approach is one of minimalist beauty that lets the music breathe, and showcases her dynamic musical talents for the world to see. Her new single, “The Lucky Ones,” is the first offering from the album and one well worth the investment.

“The Lucky Ones” is the kind of video that lifts the viewer out of their own body and places them in a calming, beautiful world created by Natalise and director Andrew James Abajian. The clip is centered on Natalise standing on ​a ​rocky​ stretch of the​ California coast​, at first staring out into the infinite​. As the waves crash behind her, she serenades the camera with the heartfelt message of “The Lucky Ones.”

Interspersed in between are shots of ​real moments from real people ​in varying states of ​life​​. Whether it be a first kiss on the Brooklyn Bridge, welcoming home a newborn baby, or an elderly couple quietly enjoying each other’s company, the 8mm style footage inspires a heartwarming connection between viewer and video.

We’re so excited to be working with Natalise + The Sunset Run and to share this touching new clip with everyone. We’re here to do whatever we can to help get this video into your programming, so please don’t hesitate to get in touch. Please contact Andy Gesner and the HIP Video Promo team at (732)-613-1779, email us at info@HIPVideoPromo.com. You can also visit www.NataliseAndTheSunsetRun.com or www.Facebook.com/Natalise for more info on Natalise + The Sunset Run.