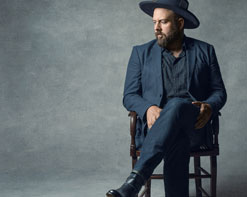 Over his prolific decade long career singer/songwriter Nate Currin has time and time again demonstrated a phenomenal aptitude for penning songs that reflect a deep understanding of our shared human experience. The seasoned road warrior and master storyteller has seen the world, having brought his music to over 20 countries and with that has come a plethora of inspiration – touching on topics that include the inherently complicated nature of love, dreams and relationships, the inevitable briefness of life, the vastness of religion and so much more. As focused and impassioned as he’s ever been and on a mission to connect with his listeners in perhaps the most visceral way to date, the Atlanta, Georgia-based artist is back with a brand new album, The Madman and the Poet and an adrenaline inducing new single, “Midnight Train.”

Having shared the stage with well-known acts such as Blues Traveler, Butch Walker, Jars of Clay and Neon Trees, as well as having been featured on MTV and a recipient of numerous independent music awards and even a ballot Grammy nomination, Nate is no stranger to receiving recognition for his years of hard work and dedication. That said, the artist maintains his underdog/“man of the people” status and proudly wears it on his sleeve. His distinctively Southern, dark and seductive, gritty guitar driven sound is roaring on his new single “Midnight Train” – to the point that you can feel in your bones. It instantly takes hold of the listener, locking you in until the final note. A perfect combination of head-turning adventure, mesmerizing bluesy bravado and captivating drama, the song could easily be utilized as the intro music for an upcoming television drama a la FX’s Justified or HBO’s True Detective (music supervisors, take note!). Based on a chance meeting with a beautiful woman who steals his heart and now permanently inhabits his consciousness, Nate’s ability to put listeners in his shoes and feel the sense of urgency he’s feeling is breathtaking.

Gorgeously directed and produced by Matt Odom (who spearheaded Nate’s previouly well-received “Vanity Fair” and “Goodnight California” clips), the new video was filmed in Joshua Tree National Park and Pioneertown, California, as well as the swamps around Gainesville and Ocala, Florida and features actress/model Shannon McComb as the ever alluring one with “Hair like a raven / voice like rain”. Will he reunite with the girl of his dreams? Tune in to find out.

It’s a great pleasure to once again be part of Nate Currin’s promotional team. For more info on the “Midnight Train” music video or his new record, The Madman and the Poet, please don’t hesitate to contact Andy Gesner and the HIP Video Promo crew at (732)-613-1779 or email us at info@HIPVideoPromo.com . You can also visit http://www.NateCurrin.com/.

For info about other Nate Currin music videos, click HERE