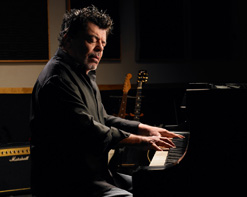 Greetings programming friends, it’s Andy Gesner and the HIP Video Promo crew, here with a wonderful new video that is as emotionally touching as it is stylishly decorated in classic rock and roll charm. From last year’s riotous and politically explosive “Come Back America,” the multifaceted Nathan Shaffer returns from mocking crooked politicians to sing us “My Little Friend (Jeff’s Song),” an unforgettable pop tune dedicated to his son, whom he lost several years ago.

Nathan Shaffer has come a long way in his music career to rattle your eardrums this fall. He spent his early days as a young rocker on Capitol/EMI, and Atlantic records, eventually giving up the gun to raise his son as a single father. Then something happened. Twenty-five years later, Shaffer leaned back in his seat at a Paul McCartney concert and suddenly, the light switched back on. The urge to sing and write surged once again through him, melodies began to materialize and encouraged by his son, Shaffer knew it was time to get back to his piano and extensive guitar collection and rekindle his musical passions. Since then, his album release Come Back America has been laced with buzz and controversy, mostly due to the attention his title track has attracted. The video for “Come Back America” featured footage of recent political events, blowing the whistle on all the outrageous clowning around the people running our country have been up to. The clip was featured by GlobeNewsWire and Street Insider, as well as music outlets AOL and NYC’s H2O Television.

Now Nathan returns with a heartfelt follow up installment that showcases a whole other side to his songwriting craft. Gone is the political angst, replaced by tender memories of his lost son, Jeff. “My Little Friend (Jeff’s Song)” is a Beatlesque gem that trades the wall of Marshalls for a Steinway and musicians from the L.A. Philharmonic to render a gorgeous tribute to the most important person in his life. The video also sports a whole new attitude, as Nathan changes from Johnny Cash into Elton John, donning a new look and top hat and playing a truly magical piano! The clip was filmed in an old L.A. Theater and features four youngsters playing strings along with Nathan as he hammers away at the keys. The performance is spliced with memories of children playing in a backyard much like the one his son grew up in. The singer donates all the proceeds from Come Back America to The Jeff Shaffer Foundation, a charity he set up to prevent teen drug and substance abuse, by helping them to lead a clean and healthy lifestyle.

Please help get this song out to the masses. “My Little Friend (Jeff’s Song)” is a kindhearted and warm track that can appeal to many generations at once. Come Back America is now available via all major Internet outlets, and we’ve got plenty of copies of the record here at the office. If you would like some for your giveaway and contest needs, let us know right away! If you need more info, call Andy Gesner at 732-613-1779 or e-mail us at info@HIPVideoPromo.com.