Nathen Maxwell “Working For The Man” 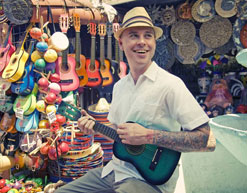 Hello friends and fellow music lovers, it’s Andy Gesner from HIP Video Promo, here with a new clip from a talented sideman who has recently developed into an undeniably expressive frontman. When Nathen Maxwell joined Flogging Molly more than a decade ago, he was only seventeen years old – his father, a talented musician and fiery rocker in his own right, introduced his son to the Celtic punk standouts. Since that day, Maxwell has toured the globe with Flogging Molly, and played on every one of the band’s provocative studio albums and incendiary live sets. Fans of Flogging Molly also know Nathen Maxwell as a talented songwriter and singer: his contribution to the group’s repertoire has grown over the years, and some of his performances have become crowd favorites. (Maxwell’s turn on “Queen Anne’s Revenge”, for instance, is nothing short of a show-stopper.) When he wrote White Rabbit in a burst of creativity, it was Flogging Molly frontman Dave King who positively insisted that he release these winning songs under his own name.

While every fan of Flogging Molly is likely to embrace White Rabbit, Nathen Maxwell’s newest project – The Original Bunny Gang – is fully distinct from his work in his Dave King’s famous combo. There’s a laid-back, summertime feel to the set; it’s breezy without ever being anything less than substantial, and the tone is sunny, if occasionally cautious. Maxwell draws from reggae, dub, acoustic folk balladry, Irish rock, country, Jack Johnson-style surf music, and the long tradition of protest songwriting. Some of the messages are subtle – in “Working For The Man”, the lead single, the song is so infectious and island-friendly that it might take you a few listens to realize that Maxwell is lodging a complaint against the economic order. Other politicized alternative bands have taken notice: Maxwell has been asked to share stages with Ozomatli on their autumn tour.

In a move that ought to please punk traditionalists (and rock geneologists) everywhere, Nathen Maxwell has recruited his dad, Maxwellvision, to play drums in the Bunny Gang – and on performance after performance, the elder Maxwell demonstrates that there was nothing nepotistic about the decision. His empathetic, creative drumming on “Working For The Man” is as authentically reggae-flavored as anything we’ve heard out of the Caribbean lately. The video for “Working For The Man” is similarly sun-baked: it’s been shot south of the border, and the scenes of city life are vibrant and detailed. Nathen Maxwell looks perfectly at home here; the signs behind him might be in Spanish, but he gives no indication that he’s disoriented by his surroundings. Instead, he approaches the camera with confidence and verve, cutting a sharp, videogenic figure in his trademark bowler hat.

Side One Dummy does it again, and we’re proud to be a part of their team. If you need more info, call Andy Gesner at 732-613-1779 or e-mail us at info@HIPVideoPromo.com . You can also visit www.SideOneDummy.com to find out more about Nathen Maxwell & The Original Bunny Gang.