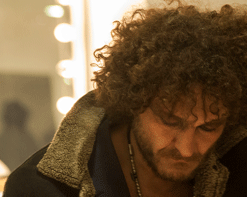 Nacho Scola is a Spaniard who has been living in Jamaica for quite a period of time. Either writing songs for Rita Marley, doing productions at Sly and Robbie´s studio or working with Grub Cooper, everyone there in Kingston calls him Natural, because to a Jamaican-Patois ear, Nacho and Natural sounds just the same. And when they mention his full name “Nacho Scola”, Jamaicans just say: Natural Colour… yeah man! (Nachas Colah… yah man!)

So Natural Colour returned to old Europe and landed in Berlin, where he has been writing and recording the songs, and after perfecting that it was finally the time for him to sing. The result is this kind of sensation of… “Why is this so special even though it is pretty standard?,” “Why these lyrics being so specific yet also so universal?,” “What´s in this voice and untraceable accent that touches me?” or “What makes his videos so different and meaningful that I can´t take my eyes off of them?”

Isn´t it great that artists with personality still come up like from nowhere and their music really TALKS TO YOU and still make you say, yeah man! Let´s enjoy that refreshing feeling with Natural Colour and the new singles for “Break The Dark” and “Mary Loves Me

Both “Break The Dark” and “Mary Loves Me” are products of a creative spirit and an intelligent, artistic mentality. For the “Break The Dark” video the primary storyline follows a dapper, handsome man as he easily works a room full of young, beautiful women. His maturity and charm easily woos them and they quickly succumb to his desires. Natural Colour performs in the background, providing a soul-infused pop soundtrack that makes this video swing and swoon with a laser-like precision. For the second video for “Mary Loves Me” the band doesn’t even appear anywhere in the video, but rather we’re treated to a single shot of a man reciting the lyrics straight into the camera, pronouncing that “Mary loves me!” to anyone who will listen. Mary, on the other hand, exists merely as a pair of hands reaching in from behind him and constantly interrupting the performance. The symbolism of the video combined with the lyrics makes for a simple, yet highly effective message that makes anyone listening give a deeper look at what’s really going on. Maybe it´s just a definition of love between man and woman, that sweet contradiction of “let me go and, at the same time, hold me”

We’re very pleased to be working with Nacho Scola and his excellent musical act, Natural Colour. We’re here to do whatever we can to get this video into your programming so please don’t hesitate to get in touch and let us know what we can do to help. For more information you can contact Andy Gesner and the HIP Video Promo crew at (732)-613-1779 or e-mail us at info@HIPVideoPromo.com .