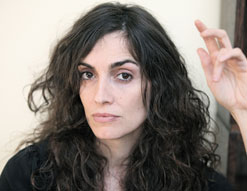 Greetings programmers! It’s Andy Gesner and the HIP Video Promo staff, here to water your ears with an extremely charming clip that will surely help warm you up this winter season. NEeMA, born of Egyptian and Lebanese decent, having shared time with the Dalai Lama and Mother Teresa, having worked with street children in Egypt, as well as having had the privilege of working with the Tribal Elders of Wekweti, an isolated First Nation community in northern Canada, now brings her truly unique life experiences and inspiration in the form of magnificent song weaving that is “Escape.”

The “Escape” video takes place inside a cozy elementary school classroom with some of the most adorable little buttons imaginable! Here, completely and appropriately dressed as a teacher, NEeMA, or should we say Miss NEeMA, teaches the youngsters the valuable lessons of compassion found in her song. Meanwhile, the students help her discover that her heart belongs to them and that they are the “Escape” she was always looking for! By the end of the clip the children join NEeMA to sing the last chorus, and after delighting themselves in watching such a heartwarming clip, so will any viewer.

NEeMA’s intimate charm transcends her video image as the song cheerfully plays out its folky and worldly magic, featuring all the strums, hums, brass, and drums that you could ever desire in an indie pop tune. “Escape” is the leading single of her second album Watching You Think, produced in association with Leonard Cohen and Pierre Marchand (Sarah McLachlan, Ron Sexsmith), which features collaborations to boot, including Howard Bilerman, Tim Kingsbury (Arcade Fire), Tom Mennier (Martha and Rufus Wainwright), Joe Grass and Miles Perkin (Lhasa de Sela), and Gurpreet Chana (Nelly Furtado). NEeMA claims to have written “Escape” while she was staying in the house of a guitar maker and picked up an electric guitar for the first time in her life.

It would seem that NEeMA has a natural talent for uncovering stories and crafting them into tasty morsels of pop, and that is the sort of ability that has brought her so much acclaim. Her last release, Masi Cho, was nominated for a MIMI (Montreal International Music Initiative) in the World & Roots category and her song “The Risk” advanced to the second round of judging in the 2006 International Songwriting Competition held in Nashville. Since then she has toured Canada, Ireland, Australia, England and the US, performed numerous concerts, including Nova Scotia’s Privateer Days Festival and the South Country Fair Festival, in Alberta. Her other highlights include her 2008 concert at the Electric Picnic Festival in Ireland, the 2008 Winterfolk Festival in Toronto and Canadian Music Week, and two sold-out shows at the Montreal International Jazz Festival in 2009.

NEeMA is currently hard at tour behind the already buzzing Watching You Think. The dates span from starting last summer and heading well into the next year! This undeniable hard work has earned NEeMA support dates for Sara Bareilles, Meiko, Cary Brothers and Ingred Michaelson.

We are thrilled to be working with this Canadian artist that is spilling over with natural talent for music and mystique, and fully deserves your programming attention. We’ve got plenty of copies of NEeMA’s Watching You Think for all your giveaway needs. We also urge you to catch her performing around the nation this season and will eagerly lend a hand in setting up interviews and appearances! If you need more info, call Andy Gesner at 732-613-1779 or e-mail us at info@HIPVideoPromo.com . You can also visit www.NEeMA.ca to find out more about NEeMA.