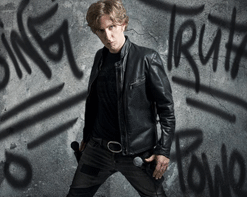 From the artist who brought you the videos for “California Run” “When The Rain Falls” and “Do Ya,” comes a new video inspired by the revolutionary spirit in the graphic novel and film, V for Vendetta. Coinciding with Britain’s Guy Fawkes Day and the US Government Shutdown, Neil Nathan injects a little dark humor into his newest video. HIP Video Promo is pleased to introduce “Evey.”

With a Ziggy Stardust spirit, Neil Nathan Inc. presents his new album Sweep the Nation. Released under the Neil Nathan Inc. corporate moniker, the album is a “power-to-the-people” concept LP. Both Magnet Magazine and The Vinyl District called the record “impressive,” and it’s garnered international features in UK’s No Ripcord Magazine and New Zealand’s Blog On The Tracks. Most recently the album was adopted by Egypt’s young revolutionaries during the Arab Spring and brought Neil Nathan Inc. seven thousand new Egyptian fans on Facebook!

The current global socio-political awakening exemplified by the Arab Spring, Occupy Movement, and most recently Quebec, Spain, Russia, Mexico, and Japan’s record setting protests inspired Neil Nathan’s creation of Sweep the Nation. He really shows his range on this record, mastering various genres such as power-pop, alternative rock, and glam-rock.

“Evey” is the second video off Sweep The Nation. The first, the “Jumpstart Obama Drag Race Claymation Video,” was called a “bizarre good time” by the Huffington Post.

“Evey” is a jaw-droppin computer animated video that is as visually catchy as the song itself. In it, Nathan explores V’s conflicted heartbreak at having to die for the sake of the revolution and say goodbye to exploring a love he has never felt before with Evey Hammond. The video also explores the romantic lure of V’s transformative influence on Evey and her evolution from innocent to world-weary revolutionary. Although the message is deep and serious, the song itself is classic Neil Nathan, with an undeniable knack for writing retro pop rock riffs, hooks, and melodies that would make any Brit rock fan take notice. Like the song, the video itself may feel dark, but is teeming with life. It is primarily a black and white presentation that is intermittently saturated with vibrant colors that leap off the screen!

Powerful artists bring powerful music that is capable of changing the current state of the world, and that is exactly what Neil Nathan Inc. does in this provocative new video. “Evey” is a clip that transforms contemporary music making viewers aware of the ever-changing political aspects of the world. We would love to hook you up with copies of Sweep The Nation, so please don’t hesitate to be in touch! For more information on this exciting new artist, please contact Andy Gesner and the HIP Video Promo staff at info@HIPVideoPromo.com. You can also visit www.NeilNathanInc.com/sweepthenation/ for more info.

For info about Neil Nathan’s “Do Ya” video, click HERE

or for the “California Run” & “When The Rain Falls” videos, click HERE