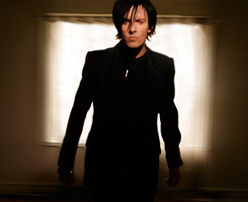 Hard rock music video lovers around the country, have we got a treat for you! It’s Andy Gesner and the staff at HIP Video Promo bringing you a behind the scenes look at the magic behind the madness! Neurosonic is Calvin Ayre’s latest discovery, and, like everything that has so far been released through his Bodog Music imprint, it’s fierce, emotionally intense, inventive, and impossible to pigeonhole into any one particular genre. Jason Darr, Neurosonic’s frontman and principal auteur, is a man after Ayre’s own heart – he has always followed his own muse. His work often strikes a balance between the electronic and the organic, combining synthesized soundscapes with rock guitar crunch; as a lyricist, his Trent Reznor influence is apparent, but so is an evident love for spoken-word and social protest music.

Darr’s industrial-postpunk hybrid has hit paydirt before: his previous band, Out Of Your Mouth, hit #5 on the Much Music charts with a stunning cover of Madonna’s “Music”. Neurosonic is simultaneously more visionary and more radio-ready. Darr is also known as one of the finest home-recording engineers in Calgary, and he’s polished his nightmares to a sinister shine. Every riff on Drama Queen, his debut, is barbed, and every drum fill feels like an audio assault. “Are Solar”, the lead single, is a prime example of how many terrific ideas Neurosonic can shoehorn into a four-minute pop cut: it begins with a verse as pained and soaring as My Chemical Romance, and expands into a bridge that’s nearly rapped, before crashing into a gigantic singalong chorus. Darr is such a deft handler of sonic tropes that the transitions between the sections are seamless.

Unlike the many electronic and post-industrial projects that are studio entities only, Neurosonic is a fantastic live act. The performing iteration of Darr’s group has been headlining the Bodog battle of the bands, touring Canada and America, and getting set for an upcoming European invasion. Darr also flashed a debonair side as a presenter at the Fuse TV Chainsaw Awards. Music from Drama Queen has already been placed in TV shows, soundtracks, and video games. The album is ready for stateside consumption as we speak: get ready!

Bodog Music has never failed to deliver the goods and it is always our pleasure to keep the winning streak alive with this exciting clip! Neurosonic is currently a featured performer on the Sno Core Tour with Army of Anyone and we would be more than happy to hook you up with a few minutes with Jason Darr for a video interview (for our money, Jason is one the best on camera interviews we’ve ever seen). If you need more info, call Andy Gesner at 732-613-1779 or e-mail us atinfo@HIPVideoPromo.com .

For info about Neurosonic’s “Are Solar” video, click HERE