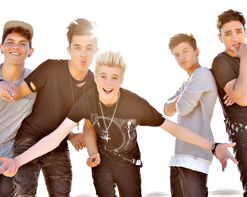 The term “boy band” is often associated with a genre that trends in and out of mainstream every few years. This can cause a less informed fanbase to conclude that it’s simply a passing fad. What they fail to recognize is that the reason why boy bands are so resilient is because at their core they are often made up of exceptionally talented young men who have worked for years to hone their skills and become masters at singing, dancing, and the art of live performance. Whether it be New Kids On The Block, N’SYNC, or One Direction, these groups are highly skilled, collaborative efforts. Today, we bring you New District, the next group in a long line of pop crooners.

Dylan, Felix, Devin, Jaden and Sean come from all over the world, assuring that New District is made of the best of the best. They’re everything we would hope for; they’re charming, engaging, cohesive, and wildly talented. In their new single “Closer” they effortlessly trade off between verses and choruses, often coming together into five part harmonies that resonates like a choir ten times their size. Of course, it doesn’t hurt that they’re an exceptionally handsome group of young men.

The lines between fantasy and reality are beautifully blurred in the video for “Closer.” A young girl sits in her bedroom, iPad in hand. She pulls up a game called New District, casually moving the characters side to side on their hover boards and creating her own imaginary world. Little does she know that the boys of New District are within reach and she’s soon brought into their world. The loving attention and serenading leaves her floored with happiness, and she falls back into her bed with a smile as wide as a canyon. Was this real or just a dream? The video ends with a final clue…

New District is a group we’re incredibly excited to share with you. As the old saying goes, they’re the kind of boys “you’d like to bring home to your mother.” We’d love to see you support this video, so please get in touch with Andy Gesner and the HIP Video Promo team at (732)-613-1779 or email us at info@HIPVideoPromo.com . You can also visit .