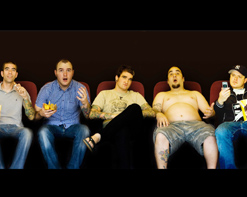 Greetings to all my comrades in music video land! It’s Andy Gesner and the staff from HIP Video Promo, here with an unlikely version of a well-known song from one of the pillars of contemporary pop-punk. Fans of New Found Glory know all about the group’s penchant for radio-pop covers: they’ll snatch a track off the commercial airwaves, turn their amplifiers up, and kick it out as hard and as energetically as they can. Their punk-rock demolition of Justin Timberlake’s “Cry Me A River” was a ‘net sensation last year, and their first iteration of From The Screen To Your Stereo – versions of songs from Hollywood movies – helped earn the band its anything-goes reputation. What’s great about New Found Glory’s interpretations of bubblegum tracks is that there’s not a shred of mockery in them – these tough guys really love pop music, and want nothing more than to play back these irresistible tunes in their own uniquely raucous style.

After all, New Found Glory is a pretty “pop” – as in “popular” – band, too. No matter how aggressively they play their guitars, Jordan Pundik and company always put the melody first. Their reward for their tunefulness has been one of the most devoted followings in contemporary music, several chart hits, and a run of albums that have become punk classics. 2002’s Sticks And Stones went gold and hit #4 on the Billboard charts; Catalyst, the follow up, did one better, peaking at #3. Only Blink-182 (a group that NFG has supported many times in concert) has a comparable claim to the title of America’s favorite pop-punk band.

From The Screen To The Stereo, Volume 2, is both the band’s latest full-length and a gift to their fans: eleven more world-famous cuts from hit movies of the Eighties and Nineties. They gallop their way through punk versions of “Don’t You Forget About Me” and “Crazy For You”, but some of the repertoire here really needs to be experienced to be believed – especially a kamikaze run through Lisa Loeb’s infamous “Stay”. Members of the Warped Tour royalty drop by to join in on the fun: Chris Carraba guests on “The Promise”, Patrick Stump of Fall Out Boy puts his own spin on “The King Of Wishful Thinking”, Adam Lazzara of Taking Back Sunday hams it up on The Cardigans’ “Lovefool”, and Sherry DuPree of Eisley graces an empathetic cover of Bob Dylan’s “It Ain’t Me, Babe.”

But New Found Glory saves the best for themselves. If you thought that Sixpence None The Richer’s “Kiss Me” was condemned to lite-radio purgatory, guess again: it turns out that it was always a punk song waiting for NFG to unlock its potential. They’ve paired it with a video that feels like a pure celebration – beautiful young people constructing a stage and an outdoor fortress out of old mattresses. New Found Glory plays in the makeshift structure, and sings these lyrics about bearded barley and sparkling silver moons with shocking conviction. Meanwhile, the kids are having their fun, especially one cad who takes to tallying up the girls he smooches in black magic marker on his arm (he gets his comeuppance, of course). Watch for a cameo by Paramore as well; when a party is this good, everybody wants to attend.

We’re very excited to be working once again with Ana Bustilloz, Kristine Ripley, and the entire Drive Thru crew once again to bring you this hit video! They’ve been kind enough to hook us up with copies of From The Screen To The Stereo, Volume 2 for all of your on-air giveaway needs. The band will also be heading out on a co-headlining tour this fall with Senses Fail, so let us know if you would like to catch up with the band for a video interview when they come to your area! If you need more info, call Andy Gesner at 732-613-1779 or e-mail us at info@HIPVideoPromo.com . You can also visit www.DriveThruRecords.com, orwww.NewFoundGlory.com to find out more about New Found Glory.