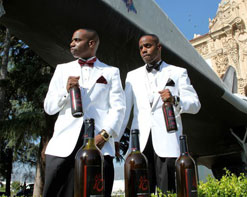 Greetings programming friends, it’s Andy Gesner and the HIP Video Promo staff bringing you a can’t miss new video! They’re smooth, persuasive gentlemen who happen to be related in both DNA and talent. Dear programmers, please put your programming lineups together for the New Money Twinz. Ryan and Bryan Wood are the new underground voices of R&B with their fresh new single simply titled, “OOH AH.” Unabashedly referring to the familiar noises of satisfying lovemaking, the track is a sexually charged mid-tempo R&B extravaganza that will get your blood pumping to all the right places.

Don’t mistake frankness and honesty for lack of consideration. These two crooners have been one of the hardest working bands of brothers since the turn of the century, when they founded their own music label New Money Records in Beverly Hils, CA (as well as a clothing line, an all-natural supplement drink and more!). As you may all be aware, running a label is a labor of love and hard work. Fortunately for the Wood brothers, their work did not go unrewarded. Their fantastic and constant stream of music videos has built them a massive YouTube and MySpace following. The duo’s work has even been noticed and featured by the ultra popular genre website WorldStarHipHop. New Money Twinz has already achieved a ton of buzz on the net, getting featured in blogs like Coast 2 Coast Mixtapes and Mixtape Wire. They have been featured videos on MTV.com and Myspace.com’s “Famous and Unsigned,” and also had several appearances on BET’s 106 & Park, MTV and The WB television outlets. The group has even been identified as a web trend on Billboard’s website!

New Money Twinz are ready to take on the digital music landscape with their latest entry, “OOH AH.” It’s got all the R&B flavored goodness one could ask for: a hot beat, smooth vocals, and, of course, sexually charged lyrics! The video follows the main idea of the tune quite ideally. The clip features the brothers singing into their telephone sets, while the receiving end features a lineup some foxy ladies wearing nothing but their birthday suit! The clip is also spectacularly done in split screen fashion, leaning towards a saucy cult film in its cinematography and style. The Twinz sing, “I’m feeling kinda freaky,” and it’s definitely working wonders on all the girls in the clip. This is certainly a piece of film that avoids typical hip hop clichés, instead trading them for an erotic concept that dances on the line of what is appropriate and what is forbidden.

The Wood brothers have provided us with plenty of copies of their brand new record New Kings Of R&B and Hip Hop, available in stores now. So if you’d like to conduct some giveaways, interviews, and contests, don’t be shy about reaching out. We’re very excited to be part of the new underground and indie R&B movement that is valiantly carried by New Money Twinz. If you need more info, call Andy Gesner at 732-613-1779 or e-mail us at info@HIPVideoPromo.com . You can also visitwww.YouTube.com/NewMoneyTwinz, or www.iTunes.com/NewMoneyTwinz to find out more about New Money Twinz.