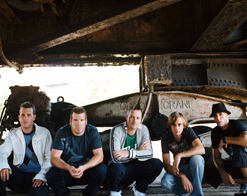 Greetings music video lovers far and wide! It’s Andy Gesner and the staff from HIP Video Promo, here with a brand new clip from a young pop-punk band poised to blow up like nitroglycerine. And today we’re asking you – have you ever wondered what goes on inside a “band van”? Not the slick kind that the major-label acts use, no; we mean those beat-up, graffiti-covered monsters that wear their mileage on their hubcaps, and that roar from gig to gig down the interstates, blasting punk rock. Well, most of us will never know, but directors Abe Spear and Ro Rao suggest one possibility in their rollicking video for “Mudslinging”. In their clip, The New Rivals pilot a van that doubles as a rolling nightclub – the steel side-doors open up onto a gigantic room containing strippers, tables, stages, and even circus performers. The shindig is, of course, invite-only, and if you happen to be a pretty girl, you can expect it to come to you! (If you happen to be dating a pretty girl, you’d best steer clear.)

Exaggeration? Well, surely a little. The New Rivals don’t really have a road vehicle that contains extra-dimensional space. But over the past three years, they have been bringing the party wherever they go. The Sayville, New York combo has gigged relentlessly, tearing up small clubs across the East Coast with their high-energy set; this November, they’ll be sharing stages indie rock legends The Lemonheads, and also with punk progenitors Stiff Little Fingers. Even the notoriously hard-to-please Rafer Guzman of New York Newsday has given the group his nod of approval (“disc to look for,” . . . “fans of NOFX, Blink-182, and Green Day won’t be disappointed”). Fire For Effect, their debut EP, was a four-song rush of adrenaline that left listeners asking if the Rivals could sustain that sort of intensity over a full-length. Wonder no longer: the band’s first full-length for Sobe Entertainment is a non-stop rollercoaster ride. Even the “Love Song” turns out to be formal satire. “Ready for a ballad?”, asks the band, before replying to their own facetious question, “yeah, neither are The New Rivals”.

But make no mistake: these two-fisted rockers are no lunkheads. On the contrary, singer and lyricist Toby Bevis is brash and witty, and favors a succinct, economical address reminiscent of Fat Mike or Billy Joe. We’re sure NOFX would love “Mudslinging”, a smart, literate get-up-and-go charger that breaks out of the gate like a runaway colt and never slows down. The clip perfectly captures the vibe of a party gone berserk: the van screeches through the streets of Brooklyn, seemingly fueled by the force of the rock within. The New Rivals are ruthless screeners – four scantily-clad car-washer girls make the cut, as does a legit skater, but ugly old dudes are left on the outside, forced to chase the van. Bevis and his bandmates don’t mind being homewreckers, either, as they pluck good-looking women from the arms of dweeby (or geriatric) boyfriends, load them in the van, and drive on. At the end, they all hit the open road, Empire State Building in the background, adventure dead ahead.

We are very pleased to be working with Angelique Barker and the entire terrific SoBe Entertainment team to champion this no holds barred clip. If you’re in the Mid-Atlantic, be sure to check out The New Rivals while they’re touring in your neck of the woods in November with The Lemonheads and Stiff Little Fingers! The folks at SoBe have also been kind enough to set us up with a plethora of The New Rivals goodies that are perfect for on-air giveaways and contests, such as posters and copies of their full length disc, The New Rivals, so don’t hesitate to reach out if we can set you up! If you need more info, call Andy Gesner at 732-613-1779 or e-mail us at info@HIPVideoPromo.com. You can also visit www.SoBeEntertainment.com to find out more about The New Rivals.