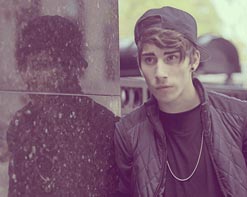 Hailing from Sydney, Australia, Nick de la Hoyde is a triple-threat for the modern age: singer, songwriter, and rapper. And although he may only be 20-years-old, the handsome, fresh-faced de la Hoyde has walked a long road of unexpected twists and turns, complete with sweeping highs and crushing lows. At 15, following his dreams of a professional football career, he moved to Barcelona where he remained for 4 years. He first began rapping as an outlet to express his frustrations, and then moved onto writing lyrics and melodies to his favorite instrumentals. Soon enough, his passion officially shifted from sports to music, composing original songs with his brother Joseph de la Hoyde (de la Aurora, Monks of Mellonwah) and promoting them online where a loyal fanbase quickly developed and continues to grow. (His Instagram account alone has gained well over 60K followers in a few short months.) Catching the interest of Chicago-based Hip Hop producer Lemoyne ‘LA’ Alexander (R. Kelly, Aaliyah), Nick was invited to the USA to collaborate. The first fruit of this international partnership is de la Hoyde’s outstanding debut single, “The Longest Way.” HIP Video Promo is very proud to present the accompanying clip, in all of its stunning, widescreen glory.

“The Longest Way” is an epic slice of modern alt-pop that juxtaposes de la Hoyde’s versatile strengths for maximum impact. The verses feature his effortless, rhythmic flow atop of delicate pianos and chiming guitars that open wide in the choruses as he delivers a enormous, melodic hook that aches and strives and makes you believe. Lyrically, the song reflects upon his long journey to this point in his life, the time he’s lost, and the purpose he’s found in music. In the chorus he sings: “The wasted days have passed away / and I feel / ’cause I’m bigger now / I’ve come the longest way.” The hope and resolve in his voice are warranted. Nick de la Hoyde clearly has what it takes to see his dreams through.

The video begins with a shot of de la Hoyde’s darkened silhouette standing underneath a row of stage lights. Bur after this brief moment indoors, we’re transported outside to a shot of him standing on a wide open plain, clutching his notebook, and staring into the distance as the sun sets. It’s breathtaking, and it’s just the beginning. The rest of the video is a pure feast for the eyes, featuring Nick alternately rapping and singing to the camera in a series of eye-popping, hi-def locales. While there are a couple of shots of him walking crowded city streets, the outdoor shots are pure magic. There are shots of lush, open country and snow-capped mountains. There are shots of forests, flowing rocky streams, and misty fog. At every location, the director captures astonishing natural light that can only be found at very precise moments in the day. It’s fitting that de la Hoyde raps the line, “moments like this never seem to last.” Thankfully, they got all of these on film. A lot of care went into this video, and it shows, making this powerful track even stronger.

For more information on Nick De la Hoyde and the stunning clip for his new single “The Longest Way”, please contact Andy Gesner at (732) 613-1779, or e-mail the HIP Video Promo staff at info@HIPVideoPromo.com . You can also visit https://www.facebook.com/nick.delahoyde.9/ for more info on Nick de la Hoyde.