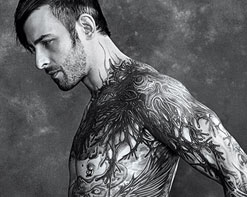 Pick a job and Nick Hawk has probably worked it. He’s had over 100 of them. Everything from a paper route to milking cows all the way to being true-life companion/gigalo. Pick an adjective and it probably describes him. Warrior, hustler, passionate? Check. Pick a life-defining event and chances are Nick has either already done it or it is on his ever-growing bucket list. Chase a tornado, Brazilian Jiu-Jitsu World Champion, or great white shark cage diving? Check. Write, record, produce, rap, sing, and then write and direct a must-see music video for it? Check and checkmate. Today, we’re thrilled to bring you the brand new video for “We Fight.”

From his small town roots in Madison, WI Nick Hawk has been working tirelessly to transform himself from a lower middle class kid into an international celebrity who counts a four year tour in the Air Force where he passed the tests to become special ops and became a Marksman, then headed west to Hollywood where he picked up shifts bartending, and personal training to pay the bills. From there he springboarded into male revue shows, ultimately starting his own stripping agency, www.ExplicitStrippers.com, which now boasts of locations in the OC, Los Angeles, Las Vegas, San Diego, and Hawaii. His physical prowess was also recognized with a spot on the cover of Men’s Health UK.

Understanding the potential, Nick switched from stripper to gigolo in 2009, and not long after he was approached about starring in the Showtime series Gigolos. He’s been in every episode for 6 seasons and shows no sign of slowing down. Season six airs March 17th!

In his free time, one of his long-lasting passions has always been making music. The most recent entry on his bucket list (which can be found at www.nickhawkexplicit.com) is “Produce a music track.  Record it.  Direct the music video to it and edit the music video.” Today, we’re incredibly excited to share with you the fruits of those labors with the new video for “We Fight.” Like everything he does in life, Nick has immersed himself in every aspect of the process and the end result is blisteringly fierce song and video that portrays the intensity and skill behind everything Nick puts his energy into.

Like the diverse personality he is, the video also uses a variety of locations, wardrobes, and lighting to paint a stunning picture. Whether he’s wielding a pair of katanas in the burning desert, menacingly strutting through the city streets like a modern-day vigilante or simply exuding confidence while donning his jujitsu gi. It’s not just showmanship, either. Nick is skilled in a variety of martial arts including sword fighting, fencing and bow techniques, all of which can be seen in the video. The message of the song and video is clear; Nick is confident in who he is, determined to accomplish the best possible result of everything he sets his mind, and he is absolutely willing to fight for what he believes in.

All of us here at HIP Video Promo are incredibly excited to be working closely with Nick Hawk and his team to bring you this killer new video. We think he is a captivating talent worthy of programming all across the spectrum and we hope you’ll include this in yours! For more information please contact Andy Gesner and the HIP Video Promo staff at (732)-613-1779 or email info@HIPVideoPromo.com .