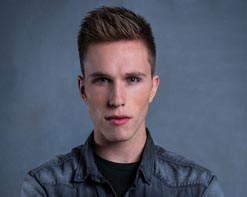 What would you do for your sick child? Would you enter a boxing ring and pound it out with a bigger, stronger man in order to win money to pay her medical bills? In the arresting clip for “Let Me Feel,” the latest smash by club music superstar Nicky Romero, a grieving father does exactly that for his terminally ill daughter — and although he loses the match in spectacularly painful fashion, he wins a much more important battle.

As he looks forward to another prolific year at the top of his game, Dutch superstar Nicky Romero now breathes a fresh lease of life into what was one of the flagship releases on his Protocol Records imprint in 2014, as he unveils the captivating official music video for ‘Let Me Feel’—his smash hit collaboration with Vicetone featuring When We Are Wild.

Romero, who has risen stratospherically through the ranks of the globe’s deejays in a short time, is no stranger to provocative video clips. His clip for “I Could Be The One,” a collaborative single with Avicii, directed by critically acclaimed film maker Peter Huang, is one that immediately snaps the viewer to attention. In the video, a disgruntled office worker quietly dreams of an escape to Barbados until the day she snaps and lays waste to a cubicle farm. The clip racked up millions of views — and the song skyrocketed to the number one position on the U.K. charts.

If the same happens to “Let Me Feel,” no fan of dance music would be surprised. In fact, the glimmering, emotionally forthright track stands likely to do “I Could Be The One” one better — it could well establish Nicky Romero as the same kind of hitmaker in the States as he is in his native Europe. He’s certainly got the credentials, and the track record of American pop success: Romero co-produced “Right Now,” a hit for Rihanna, with David Guetta, and collaborated with Britney Spears on her Britney Jean set. An official Nicky Romero remix of One Direction’s romantic ballad “18” is just gathering traction in the U.S. The time is right, and the song is here: “Let Me Feel,” with the outstanding production team of Vicetone, features a grand, sweeping vocal by When We Are Wild, the balladeers behind the international hit “Scuse Me.”

Once again teaming up with Peter Huang, this emotive piece of videography follows the story of a father’s struggle pay off the medical bills for his sick daughter. Emotionally and spiritually in sync, this short movie captures their agonizing uphill battle as both father and daughter fight with everything they’ve got to overcome their excruciating hardship. Debuted live and direct from the Protocol headquarters in Amsterdam on February 7 by means of an exclusive livestream event, thousands of dedicated Nicky Romero fans tuned in to watch the official premiere of the tear-jerking music video, listen to Nicky discussing how it was made and participate in a live Q&A with the man himself. For those who missed out first time around, the official video for Let Me Feel is now available on YouTube for all to enjoy.

We are beyond thrilled to be a part of the Nicky Romero promotional team and are certain that this is a video you and your viewers will embrace! Please contact Andy Gesner and the HIP Video Promo crew at (732)-613-1779, email us at info@HIPVideoPromo.com for more info on Nicky Romero. You can also visit the following websites for more information: