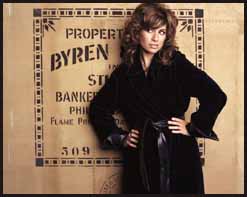 Welcome to 2007 and thank you for all of your support in 2006! It’s Andy Gesner and the staff from HIP Video Promo, starting off the new year with a video from a popular young artist on the verge of a major-label breakthrough. Here in Central Jersey, we all know how exciting the Asbury Park music scene has been recently – and Nicole Atkins has been right in the middle of that revival. Even before her breakthrough deal with Columbia Records, Atkins was a star on the Jersey circuit, dazzling audiences in the New York metro area with her passionate amalgam of folk, rock, blues, and contemporary singer-songwriter music. Unafraid to examine the “dark stuff” in her songs, she’s already won plaudits for her unflinching honesty and her detailed storytelling. Regional newspapers have situated her writing within the famed tradition of poets who’ve made Asbury Park and the Jersey Shore synonymous with uncompromising rock and roll.

Which isn’t to say that Nicole Atkins sounds anything like The Boss. But she does draw inspiration from many of the same sources that he did: Bob Dylan, Roy Orbison, sixties psychedelic soul, country-politan stars like Patsy Cline, musical theatre, the Rolling Stones. Bleeding Diamonds, her debut EP, nods at all these sources but genuflects to none of them. What she shares with her forebears is an ability to make her deepest emotional responses feel universal. It certainly helps that she’s got the voice to do it: rich, haunted, dreamy-yet-tough. She can slip effortlessly from a jazz phrased-verse to a belted pop chorus and back again, and her multi-dimensional songs give her flexible pipes a workout. Rolling Stone magazine noticed – they named Nicole Atkins one of their Ten Acts to Watch for 2007.

Atkins’s lead single is named for the town she grew up in: Neptune City, a Jersey shore town just a few miles south of Asbury Park, but worlds away in feel, vibe, and attitude. It’s a song of dislocation and alienation, and regret at how her hometown has changed – but there’s real love and respect in there too. The band settles into an atmospheric groove as Atkins pulls her vowels like saltwater taffy, stretching every last bit of poignancy out of her crisply-written verses.David Sutton’s gauzy video for “Neptune City” opens a pinhole onto vintage images of the Jersey Shore. It’ll appear to the viewer that he’s looking into one of those old-style hand-cranked coin-op movie machines – the corners of the frames fade to grey, the picture is a quivering ellipse, and the camera drifts in and out of focus. The pictures of Asbury Park are faded and sepia-toned, but Atkins herself is shot in color, and inserted into the postcards; in one memorable shot, she stands on a boardwalk balcony, closed stores behind her, staring up at the camera. Is Atkins visiting memories of Asbury Park in her mind – or is Atkins herself the memory, and a trace of an unexplored possible past?

It is out greatest pleasure to be starting out the new year working with Andy Lewis and all of the good people at Red/Columbia to help bring the name Nicole Atkins into the mainstream of popular culture! We’ve said it before, but we’ll say it again, when it comes to Garden State artists worthy of attention, you can trust HIP to go the extra mile to make sure you have everything you need to champion this deserving songstress. We also have plenty of copies of Nicole’s Bleeding Diamonds EP for all of your on-air giveaway needs, so don’t hesitate to be in touch. If you need more info, call Andy Gesner at 732-613-1779 or e-mail us at info@HIPVideoPromo.com. You can also visit www.ColumbiaRecords.com, or www.NicoleAtkins.com to find out more about Nicole Atkins.