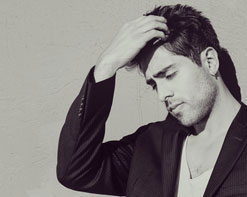 Nik Salazar has dreamed since his youth of being an international singer. He was born in New York and raised in Colombia, where he has risen to stardom of the highest caliber. His unique mix of musical talent and natural onscreen ability has made him a crossover star of both radio and tv.

He first appeared on Chica Vampiro a musical series for “RCN Televisión”, which was also purchased in several European countries, and by Nickelodeon for all Latin America. And a year later, he was chosen as the human main character in the 15th season of “Sesame Street,” which is currently broadcast on “RCN Televisión”, “Televisa”, “Univisión” and “Discovery Kids”!

Currently based in Los Angeles, Nik is riding a wave of momentum behind his new EP, All Yours, which is an addictively delicious slice of 90s ear pop music. His first single, “Who Am I Kidding,” uses infectious melodies and an unparalleled performance to tug on the heart strings of anyone who has ever experienced their own heartache.

With “Who Am I Kidding,” Nik aims high and delivers a pop gem of epic beauty. The video follows Nik as he copes with the pain and emptiness of suddenly being alone in a home that was once shared. Every mundane routine around the house, whether it be fixing a meal in the kitchen or taking the morning shower, feels like it takes the effort of a thousand men. Regardless of how he got there, when the heart is broken even the simplest routines feel incredible challenges. Based on his convincing performance it’s not hard to imagine that Nik has been here before.

Now’s a good time to get on the Nik Salazar train because it’s quickly pulling out of the station towards very big things! Please contact Andy Gesner and the HIP Video Promo team at (732)-613-1779, email us at info@HIPVideoPromo.com. You can also visit www.NikSalazar.com for more info on Nik Salazar.