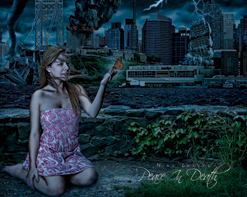 Hello music fans! It’s Andy Gesner and the staff from HIP Video Promo, here with a new clip from an unusual hip-hop act with a cinematic vision and a flair for the dramatic. Multitalented producer and composer Zack Hemsey has been making adventurous recordings for years – but only recently was his Nine Leaves collective thrust into the national limelight. The Northern New Jersey act provided a propulsive new look at a Reebok spot featuring Allen Iverson, which turned into a cult-favorite among their fans. The Iverson clip quickly became a popular download on YouTube, and viewers began to ask: where can we get this artist’s music? As it turned out, the executives at the NBA were also watching – and they licensed Nine Leaves’ music for use on their highlight shows.

And if that’s all you knew about Nine Leaves, you’d probably assume that they were a straightforward mainstream rap act. Well, we’re here to tell you otherwise. That there are plenty of possible commercial applications for Zack Hemsey’s hypnotic soundscapes is indisputable – the Iverson spot proves that to be true. But Hemsey’s heart is in the music, and the emcees who give voice to his compositions are, to a man, thoughtful, impassioned, and poetic. The rhymes on Peace In Death, the latest Nine Leaves album, have the cadences, depth, and resonance of the best spoken-word.

They’re also conceptually linked, and often politically provocative. Peace In Death is a set about the end of an era – songs about finding the strength and balance to survive and move through a deteriorating world. Mortality haunts the album’s verses, but there’s the promise of rebirth, too. Then there’s the music: moody, seething, intoxicating, harmonically and rhythmically sophisticated, and surprisingly multifaceted. Some of these pieces are hip-hop instrumentals reminiscent of those on Endtroducing; on other cuts, Hemsey invites his rappers to emcee over spooky synths and skeletal beats utterly unlike anything on contemporary radio. And just when you’re ready to call Nine Leaves an art project, the producer-composer hits you with something like “Pain Is Not Enough” – a gritty hardcore track rough enough for any mean streets.

“Yesterday”, the album’s kickoff, shows the collective in top form, as each emcee tells a compelling story of perseverance in the face of personal loss. The inviting video gives a glimpse into the lives of each vocalist: we follow them on a typical morning, rapping as they greet each other, their girlfriends, and the day. As befits an act as cinematic as Nine Leaves, the “Yesterday” clip feels like a mini-movie – or perhaps three interlocking mini-movies. Like the song itself, the footage feels honest, soulful, and confessional, and it welcomes viewers into the collective with open arms.

We are stoked to be working with Zack Hemsey, Abran Maldonado and the cast of Nine Leaves to champion their stellar new clip for “Yesterday.” We are also in possession of a healthy supply of the new CD Peace In Death for your on-air giveaways and contests, so don’t hesitate to get in touch! If you need more info, call Andy Gesner at 732-613-1779 or e-mail us at info@HIPVideoPromo.com. You can also visit www.TreesOfEarth.com to find out more about Nine Leaves.