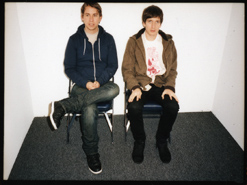 Howdy music lovers! It’s Andy Gesner and the staff from HIP Video Promo, here with a gorgeous and psychedelic new clip from one of the underground’s most startling new outfits. If you’re up on your indie rock current events, you probably know all about The Smell – a Los Angeles bookstore-café-venue that has become the city’s most exciting and challenging new performance space. The coterie of bands associated with the club share little in common besides their commitment to experimentation; nevertheless, they’ve begun to be discussed as a coherent movement. And right at the crest of the wave is No Age – the wildly-creative noise-pop band who became the first of the Smell regulars to gain a national reputation. Their early singles were undeniable: bursts of fuzz, distortion, and irresistible melody, performed with skill, invention, and good humor. Weirdo Rippers, their first full-length CD (and one that pointedly featured a picture of The Smell on its cover), collected these songs, and, upon its release, rave after rave.

Now comes Nouns, the group’s sophomore effort and its first proper album, and celebration has been general across the indi e-rock landscape. The dizzy Nouns has the distinction of being Pitchfork’s highest-rated album of 2008 so far. In a 9.2-scoring review on the influential website, Amanda Petrusich captures the excitement and disorientation engendered by No Age: “all you’ll know for sure is that you’ll want to listen more”, she explains, “maybe forever. Other critics – including many who write for mainstream publications – have proven to be every bit as enthusiastic about the duo as the web cognoscenti are. Spin and Rolling Stonehave both praised Nouns; across the Atlantic, No Age has become a favorite of the NME.

But in our opinion, it’s Tim Sendra’s four-star review in the All-Music Guide that best explains why No Age is so remarkable. After praising the group’s stunning experimental soundscapes, Sendra praises the group’s wickedly-effective stealth-pop songwriting. “No Age aren’t about noise alone”, he writes; “take the songs out and scrub them up a bit, and they would be as shiny and clean as things you might actually hear on the radio.” Lead single “Eraser” is such a song: it draws in listeners with hypnotic guitar patterns and a wall of scintillating six-string. Halfway through the piece, however, drummer Dean Spunt begins to sing – and when he does, “Eraser” turns into the most hummable piece of noise-rock we’ve heard since the heyday of My Bloody Valentine.

Andy Bruntel’s trippy clip for “Eraser” also marries otherworldly effects to an approachable DIY aesthetic. The video opens with shimmering bands of color saturating the frames; these clear away, and the camera finds No Age at a backyard party in a typical suburban town. However, Bruntel slows down the footage just enough to make the outdoors scene look weird and ominous. As guitarist Randy Randall treks away from the lens on a cement path, a woman on a porch throws a bucketful of white powder on his head. He trails chalk-clouds as he walks, passing partygoers who dodge between helium balloons and chuck streamers over trees. Later, as Randall and Spunt run along the same pathway, the footage buckles and distorts like a reflection in mercury. They’re trying to get to their musical instruments (they’re set up in the yard), but each time they start to play, they find themselves back at the beginning. The backyard becomes an odd obstacle course to navigate, each floating balloon a signpost in a strange and distorted world. Night falls, the film effects intensify, and No Age plug in and begin to rock.

It is always a treat to work with Lacey Swain and the unbeatable staff at Sub Pop Records. As always, they have been kind enough to endow us with a healthy supply of the new record Nouns, so don’t hesitate to get in touch for all of your on-air giveaway needs. If you need more info, call Andy Gesner at 732-613-1779 or e-mail us at info@HIPVideoPromo.com. You can also visit www.subpop.com or www.myspace.com/nonoage to find out more about No Age.