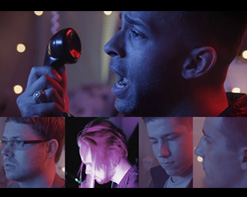 Standout indie pop band No Alarms proves how much drive and dedication pays off when making music. Founded in Dallas, Texas by multi-instrumentalist Andrew Boles, No Alarms began as a passion project with a clear end goal to make it big in the industry. Now, the band consists of a full five-piece ensemble, featuring a mix of organic and electronic elements that makes for the perfect sonic balance. The recent release of their self-titled debut EP kicked off the group’s official venture into the music scene. “Amateur Telephony,” the second single from the project, is already turning heads with powerful lyrics and an original take on the quintessential “new wave” sound.

After founding the band, Andrew quickly noticed that Dallas wasn’t the environment No Alarms needed to spread its signature aesthetic; a neon-light-saturated synth-rock alternate reality. To fix this problem, he took the band to the everchanging city of Detroit. Since then, No Alarms has blossomed, sharing its unique take on pop with Detroit’s mixed bag of music lovers. Andrew and his band members- Jack Reedy, Jordan McLanson, Stephen Werner, and Daryn DeCriscio- have been collaborating over the past year to develop their synergy as a group and style overall. “Amateur Telephony” is a byproduct of this hard work, featuring striking guitar riffs, a heavy bass line, and a killer combination of percussive elements.

“Amateur Telephony” isn’t just another great indie pop track that you’ll be playing on repeat nonstop. It’s a song that sends an important message, tackling the current scourge of drug addiction, a devastating issue that Andrew has witnessed far too many times in life. The “Amateur Telephony” music video instantly puts the song into the context of drug abuse, as its lead character is shown snorting cocaine as the video opens. Double exposed shots layer images of the band playing underneath scenes of the woman partying and doing drugs, mimicking the disorienting high she is experiencing. Close up shots of Andrew singing “Hello… Hello…” into an old phone demonstrate the struggle one faces when trying to get through to a loved one battling addiction. The phone conversation he tries to initiate shows that even if your words aren’t being received, it is still important to be there for others and encourage them to take care of themselves.

Boles is excited to blow fans’ minds at live shows with the stage and lighting elements he’s personally designed as an experienced engineer. No Alarms plans to keep the music flowing, with a tour and even more new music coming this summer. It’s our sincere hope that you and your viewers will flock to “Amateur Telephony,” share it on your socials, and add it to your programming in a timely fashion. Rest assured we will have plenty of outstanding No Alarms merch to set up online/on-air contests and giveaways throughout the campaign. Don’t hesitate to let us know what we can do to help you spread the musical mosaic that is No Alarms. Please contact Andy Gesner and the HIP Video Promo team at (732)-613-1779, email us at info@HIPVideoPromo.com. You can also visit www.NoAlarmsMusic.com for more info on No Alarms.