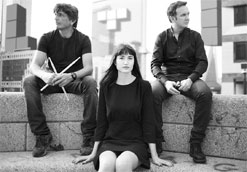 The definition of node is “a point at which pathways intersect, creating a central connecting point.” NODe (“Not Ordinary, Dead”) is an Italian powerhouse of a band that transcends genres, time, and influences to place them at the epicenter of creative expression. Although the process might be messy, the chaos fuels their revolution with their electronic solutions and rock-oriented trajectories. With their indie, pop, punk, new wave and darkwave sound, they have risen up as post-modern pop diamonds in the rough.

In 2011, this group of seasoned musicians joined forces. Their music carries the same elegance defined by their own inventiveness and refinement. Composed of Johnny Lubvic, Karissa, Andrea Vinti, Massimiliano Mauriello, Stefano Marseglia and Roberta Arienzo, their music breaks ordinary stereotypes to which the listener is accustomed to, producing a whole new reality. They deconstruct and reinvent themselves through their drum-programming, fluorescent sequenced lines, catchy guitars, and unpredictable vocal harmonies. This creative process has introduced us to their discography including Tuning the Untunable (2011), Tragic Technology Inc. (2014), Human Machine (2016) and their latest addition Rcade. Inspired by the 80s, their latest single “S.O.D.A.” gives us all a taste of their high vibration through their perfectly balanced transversal euphonies and effective male-female vocalism.

NODe’s music for “S.O.D.A” is easily their greatest creation yet. Directed by Vincenzo M. Cinefra, the scene opens in an arcade complete with bright colors and intense laser beams. They are quickly enthralled with the “Vintage Vault” and begin to play a game that unknowingly seals their fate. As they drive their car into the unknown, they let the beat take them in an uninterrupted flow of active entertainment and sonic spectacularity. This Friday night certainly turns out freaky as they drive into an abyss, concluding the game and hopefully their ride.

We’re elated to be working with NODe to promote the “S.O.D.A” music video! We hope you embrace this clip like we have and consider adding it to your regular programming and online presentations. Rest assured we’ll have plenty of NODe merch available for on-air contests and giveaways so don’t hesitate to get in touch. For more information on NODe, please contact Andy Gesner and the HIP Video Promo team at (732)-613-1779 or email us at info@HIPVideoPromo.com. For recent updates on NODe check out instagram.com/notordinarydead/ and facebook.com/notordinarydead.