Noel Webb “Journey With Me” 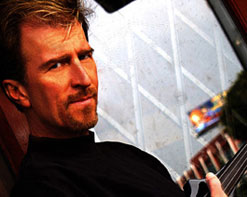 Hello friends! This is Andy Gesner of the one and only Hip Video Promo with a sultry and sexy clip from one of the most unique artists anywhere: Noel Webb – electric violinist. The video for his latest single – “Journey With Me” – features Webb delivering a dynamic performance alongside his rock-jazz band and a full string orchestra comprised mainly of beautiful brunettes in short black dresses, high heels and ruby red lipstick. Reminiscent of Robert Palmer’s iconic “Addicted to Love” clip, except these ladies are actually playing their instruments. Webb – a true virtuoso – wouldn’t have it any other way.

Even if you’ve never heard of Noel Webb, there’s a good chance you’ve seen or heard him before without knowing it. Apart from his music career, Webb’s resumé is full of notable credits in film and television. He is an accomplished actor, having been a regular cast member on General Hospital and a recurring character on Mad About You. More recently, his work as voice-over artist has been heard as the narrator of many movie trailers and popular biographies on TNN and A&E. As naturally captivating as his voice may be, however, it pales in comparison to the many voices of his electric violin. Performing professionally since the age of 14, Webb went on in adulthood to work with many great artists including members of Herbie Hancock Headhunters, Tony Bennet, and the late Grover Washington Jr. Along the way, he developed a signature style of rock-jazz electric violin that owes as much to the revolutionary guitar work of Jimi Hendrix as to any of the jazz greats. “Journey With Me” is taken from his forthcoming sixth studio album Violin Electric. His striking sound is clearly featured in this video where we watch Webb pull a jaw-dropping range of tones from an instrument much of the world has never heard. Our hero intends to change all that.

In the video directed by Kaz Matsugu, a couple of the aforementioned brunettes sit brooding in a darkened room, as the sound of a violin plays in the distance. The instrumental song begins with the traditional sound of acoustic violins, evoking the dramatic feel of a movie score. Then, out of nowhere, Webb hits his electrified strings and the song blasts off on top of a sexy beat. Webb struts down a catwalk underneath spotlights with his two violin-playing muses behind him. He ends up on stage with a full band and orchestra and leads the ensemble with a engaging and passionate performance that will have stunned viewers asking, “Is that a violin he’s playing?” The answer, of course, is no. It’s an electric violin. And not to give too much away, but there’s also subplot somewhere in there involving vampires. All in all, it’s a wild ride.

As Webb gears up for a host of network and cable television appearances to promote his music, the word is already beginning to spread about him and his unique sound on the internet. Wes Gillespie, Editor of JazzNet247.com, wrote, “Noel Webb is carving a niche in a jazz sub genre which artists like Miles Davis, Jimi Hendrix, Smokey Robinson and Shania Twain did for jazz, rock, soul, and country music respectively in the past.” Check out “Journey With Me” and you’ll agree that Webb’s ample talents – not to mention his natural star power – are on full display.

We are excited to be working together with Joe Wilson and the team at Red Lab Records to bring you this unique brand of musicianship. We will be well stocked with plenty of copies Violin Electric for you and your viewers, so please don’t be shy about getting in touch. If you need more info, call Andy Gesner at 732-613-1779 or e-mail us at Info@HIPVideoPromo.com. You can also visit www.NoelWebb.com to find out more about Noel Webb.