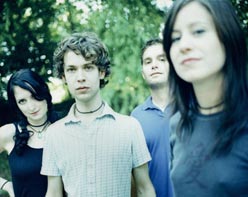 Hi, programmer pals! It’s Andy Gesner and the staff from HIP Video Promo, checking in with another great new video. Here at HIP headquarters, we’ve been wearing out copies of Fall Back Open, the second full-length from Now It’s Overhead. We continue to find the Athens act one of the freshest, most arresting sounds of the year, and we’re thrilled to have the opportunity to bring the first clip from Fall Back Open – the artful, ominous “Wait In A Line” – to your attention.

Now It’s Overhead is an act with an impeccable indie rock pedigree. Clay Leverett – responsible for the echoed, studied-but-thunderous drum performances that give Fall Back Open so much of its frightening character – also beat the skins for Bright Eyes. Orenda Fink and Maria Taylor, better known as Azure Ray, contribute bass guitar, spooky synthesizer, backing vocals, and some highly processed brass to the project. Conor Oberst and Michael Stipe (no strangers to the Athens scene) both make unassuming appearances on the sophomore release. But the bandleader is Andy LeMaster: sideman and mix engineer on so many landmark Saddle Creek recordings, and, with Fall Back Open, an accomplished indie rock auteur in his own right.

“Wait In A Line” is a song about the surrender to the emotional logic of club culture – a subject that is explored in some detail on Fall Back Open. Animated by rhythm and the heat of close proximity to others, the narrator gives himself over to an excitement that’s palpable, and not a little sinister. Although he acknowledges the “quick decline” at the end of the night, the thrill of feeling compromised – to both the rhythm and the milieu – is a powerful lure. The track opens with a huge, frantic drumbeat and throbbing bass, and builds from there: Eighties-funk rhythm guitar solo bridges the first two verses; drugged, seductive cooing from the chorused backing vocalists lend the song an eerie resonance. LeMaster’s voice pushes its way through the track with the swagger of a club kid making his entrance: a compelling mixture of the cocksure and insecure.

Hard-eyed, curly-haired, and impossibly thin, LeMaster looks the part of the art-rock frontman. In the clip for “Wait In A Line”, he stares at the camera with an intellectual’s tough-guy intensity reminiscent of David Byrne in the “Once In A Lifetime” video. But during much of the beautifully filmed spot, he’s not looking at the camera at all: he’s got his eyes on the road, from behind the steering wheel of a vintage sedan. The other cast members ride as passengers, dozing, or staring out the window as the scenery flashes by. The rhythm of the passing lights locks in with the backbeat as the car streaks through a tight tunnel, and is nearly engulfed by the mist on an abandoned country road. LeMaster continues his cruise past barns and hillocks, through a seedy, rain washed downtown, and past constellations of window lights in office towers. We watch him walk toward us on the broken white line of the highway, his legs crossing as though he’s balancing on a tightrope. Throughout, there’s an overwhelming feeling of jeopardy and fragility, a blind flight from an invisible adversary. At one point, the car breaks down on a dark country road, and LeMaster gets under the hood. His face is lit from below by a portable lantern; painted by shadow, etched with concern, but still analytical, thoughtful, and maybe a little angelic.

It’s always been a pleasure to work with Robb Nansel and the Saddle Creek team, and once again we thank them for bringing us in on this engaging promotion. The band will be on tour in September and October, so if you want to see them, interview them, or get a video ID when they come to your area, please let us know (You can check the Tour Dates link for times and venues).

In order to generate even more excitement for this promotion, we are holding the “Saddle Creek Prize Pack” contest. Any programmer that adds the Now It’s Overhead “Wait In A Line” or The Faint “I Disappear” videos during the month of September will be entered into a drawing to win a prize package including: a 12 pack of your favorite Saddle Creek releases, a limited edition DJ-only promo 12″ vinyl copy of “I Disappear”, buttons, and autographed copies of Wet From Birth and Fall Back Open. The drawing will take place September 30th. If you need more info, call Andy Gesner at (732) 613-1779, or emailinfo@HIPVideoPromo.com .You ca also visit Saddle Creek, or The band’s official site to find out more about Now It’s Overhead.