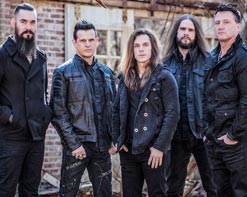 While their name is derived from the Buddhist demon Mara–lord of temptation and destruction–NoMara hails not from the Far East, but from the American Midwest where singer Kelly Burdge and guitarist/producer John LeCompt (Evanescence/Machina) got together in the studio for fun and stumbled upon a massive and monstrous hard rock sound. Released in 2009, their self-titled debut album went on to sell 10,000 copies. After some minimal touring, the band went on hiatus before reconvening in 2012 to begin working on new material. At last, the band is on the eve of releasing their long-awaited sophomore effort, and if their lead single is any indication, NoMara has truly outdone themselves. HIP Video Promo is very pleased to present their intense clip for “Sell Out”.

Exploding out of the gate with a fast and furious metal riff, “Sell Out” wastes no time and instantly commands your complete and undivided attention. Like a terrifying machine, NoMara rages with deadly precision and complete control, piercing you with screaming guitars and pummeling you with double bass drum mastery. The volume comes down only long enough for Burdge to charismatically deliver his verse lyrics in dark, foreboding tones, before the band attacks again. And just when you think the needle is in the red, the chorus takes it to 11, as Burdge shows his very impressive range, and the band follows suit. After a fantastic, dynamic breakdown in the bridge, NoMara clobbers you one last time, and the effect is pure adrenaline. Look out world. NoMara means business.

The accompanying video puts the powerful band on display, creatively editing performance footage for a clip that grabs you and refuses to let go. Playing to the camera with floodlights and huge amplifiers behind them, NoMara delivers the energy of the song without holding back. Multiple angles of the band flash across the screen at breakneck speed, as Burdge makes it personal, confronting the camera at close range. All perform with a seasoned sense of showmanship on camera that makes this clip truly captivating from start to finish.

For more information on NoMara, their new single, and their upcoming tour dates, contact Andy Gesner and the HIP crew at (732) 613-1779, or e-mail us at info@HIPVideoPromo.com for more info on NoMara.