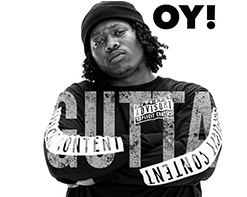 DMV is not always a source of consternation that involves long waits for vehicle registration and renewing drivers licenses. For the millions down in the vicinity of our nation’s capital, it stands for DC, Maryland, and Virginia, the three regional players in the DMV scene. Though they have their differences on a small scale, when it’s all said and done the DMV transcends borders and creates one cohesive, brotherly scene.

With his brand new single, “Gutta,” DC’s own Noochie has delivered anthem for the ages. The song celebrates those who have helped keep Noochie level-headed and focused growing up. He leads off saying it is for all those that “kept me off the streets,” but who simultaneously “laid the foundation for the streets.” With his crew at OY Music Group leading the way, he slings verses about how even though it was the streets that made him who he was, it’s time to move on to bigger and better things. It’s not however, about leaving it all behind. Rather, it’s like the old adage “a rising tide lifts all ships.” Noochie wants to bring everyone along for this ride by his side and “pull them out of the gutta.”

The video begins with Noochie in front of the National Mall and towering marble monuments with Noochie saying “this is the DC that everybody knows…” Then with a quick cut to a housing complex and a young man counting bills he says “this is the DC I know.” “Gutta” rolls out like a ride along through the heart of the DMV community. While wearing their #WhoIsNoochie branded shirts, they hit communities like Lincoln Heights, Geraldine Apts, and Barry Farms, proudly wearing the Nats hats and waving their Redskins flags. They even take over the 295 freeway through the heart of Anacostia, rolling with exceptional swagger in their low-riding classic whips. The camaraderie is one of genuine respect and affection for one another. And no tour of DC would be complete without a stop in at the world famous Ben’s Chili Bowl to wind the night down.

To celebrate the release of this killer new jam, we’re very excited to be working side by side with the good folks at OY Music Group. We’ve got all things Noochie that you’ll need to get this video into your programming, so please don’t hesitate to get in touch. Contact Andy Gesner and the HIP Video Promo staff at (732)-613-1779 or email info@HIPVideoPromo.com. You can also visit www.Facebook.com/NoochieMusic, www.Twitter.com/NoochieMusic for more info on Noochie.