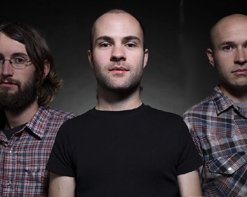 A big shout out to all of my cherished music video programmers! It’s Andy Gesner and the staff from HIP Video Promo, back with another new video from an emerging band that has been getting attention wherever they play. The North Atlantic have an unusual backstory, even for an indie act – they’re a group resurrected by the devotion of their fans. The original iteration of the group disbanded three years ago when the principals graduated high school and moved away to attend college. But in their short time together, The North Atlantic attracted a cadre of devoted followers, and their reputation built by word-of-mouth. Before long, the group recognized that groundswell – and reunited, by popular demand.

Now, in 2006, their debut album Wires In The Walls is being released by North Jersey imprint We Put Out Records, and The North Atlantic are very much back with us, three years older but as ferocious as ever. And they’ve been spreading the gospel, touring across the country and sharing stages with These Arms Are Snakes and Planes Mistaken For Stars. This time, there’s no question about their reception, or about the permanence of the outfit: The North Atlantic are here to stay.

That audience enthusiasm has taken brothers Jason (vocals, guitar) and Cullen (drums) Hendrix and bassist Jason Richards from their hometown of Kalamazoo, Michigan to the San Diego punk scene and then to stops at clubs across the nation. They’ve absorbed musical elements from everywhere they’ve been: stormy Midwestern post-punk, California pop-thrash, and even a little arty New York experimental-noise music. All of those influences are present on Wires In The Walls, a set that nods toward most of the important musical movements of the Nineties, and then jets off in wholly original direction. Jason Hendrix’s voice is a perfect vehicle for boozy storytelling: it’s husky and raw, yet it communicates a startling vulnerability. The Pixies-like “Scientist Girl” – a clever complaint about mistreatment at the hands of a callous girlfriend – is a perfect example of Hendrix’s ability to animate a character.

It’s that sort of complexity that the video production team at Artificial Army is so good at communicating to audiences. They’ve worked with complicated artists – Coheed & Cambria, Thursday, The Mars Volta, and even Blackalicious – and in each case, they’ve delivered a dark, suggestive clip that heightens the intensity and ambiguity of the song it’s meant to accompany. Army director and “commander of operations” Simon Chan applies the same sensitivity and troubled vision to “Scientist Girl”, and emerges with a video that connects The North Atlantic with the classic 120 Minutes-style alt-rock acts that the band often resembles.

We’re shown Jason Hendrix in a dark room, lying face-upward on an operating table; his mouth opens and he sings, but his voice is slightly out of phase with the image. This disconnect is destabilizing, and it augments a mounting sense of helplessness. His “surgeon” is the Scientist Girl of the title, and she cuts into him as he spits out his words of protest. We see her hands, and her actions, but we’re never shown her face clearly. However, Chan does cut to a washbasin – her hands go in clean, and emerge soiled with blood. Darkness closes in on the characters, and eventually Hendrix and his bandmates appear as floating heads against a disturbing backdrop. They sing, they rage, and one by one, they blink off like lights.

We’re pleased to have the opportunity to work together with Jon Landman and all of the music lovers at We Put Out Records. Our friendship with We Put Out goes back many years, and it is our greatest pleasure to help them bring The North Atlantic the exposure they so rightfully deserve. The North Atlantic is constantly on the road, so if you want to set up any video interviews or on-air giveaways of Wires In The Walls, give us a shout and we’ll be sure to hook you up. If you need more info, call Andy Gesner at 732-613-1779 or e-mail us at info@HIPVideoPromo.com. You can also visit www.WePutOutRecords.com, orwww.TheNorthAtlantic.com to find out more about The North Atlantic.