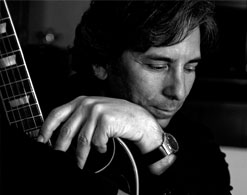 Greetings cherished video programmers, it’s Andy Gesner and the HIP crew back again with one of our favorite clients of 2010! This summer, there’s been no shortage of videos to get us in the right mood for the season. Following suit is Nuke The Soup, who comes fresh off a successful campaign with their last video, “Yin And Yang.” They’ve released their compelling video “Filled With Dread” to remind us of those hazy days.

The song itself is, as the Baltimore-based quintet describes, is a “upbeat, ska-tinged number, which is a perfect summertime cut to go with your Red Stripe.” You hear this distinctive arrangement almost immediately, way before the video kicks into gear. In the clip for “Filled With Dread,” the band removes themselves from the forefront of the video and hones in on one character who walks the bustling streets of Los Angeles (an appropriate choice of location considering the inherently California feel of the track). It’s a straight-forward yet visually appealing video shot in a faint grayish blue tint. The leading man pulls up an iPod to his face, and a pair of lips projected on the screen mouths off the lyrics of “Filled With Dread.” All the while, he meanders through a Laundromat and a convenience store, does flips off of rails and breakdances in the middle of an empty parking garage. The way he acts out and how he stares directly into the camera when the iPod video lips are singing is perhaps his way of expressing just how much he is “filled with dread”. The viewer will be intrigued to notice the backward moving cars and people in the video and wondering how director George Rausch achieved the effect. This can be largely attributed to the undeniable talents of Jacob “Kujo” Lyons, who performed the entire clip walking backwards, so what you are seeing is actually the footage in reverse! Such skills are to be expected of Lyons though, after all he is a member of the wildly popular Cirque de Soliel troupe.

Visually, it’s up for interpretation, but you can’t deny the infectious melody of the song. In fact, you can hear that Nuke The Soup wears their Bob Marley influence on their sleeve with “Filled With Dread.” It’s no wonder why it was one of the most added radio tracks on FMQB’s Triple A chart. You wouldn’t expect anything less to come from Nuke The Soup’s front-man and premier songwriter Mark Davison. He’s a music veteran who spent the greater part of his decade-long career refining his songwriting skills in the band Cubic Feet.

“Filled With Dread” was originally tapped as the first single off of Nuke The Soup’s debut album¸ Make Waves Not War. The album has been critically-praised by the rock and roll intelligentsia, like SkopeMagazine.com, who pointed out that, “The overall feel of this album is so contagious that by the end of the last song you will feel better without question. Soak up all the goodness that Nuke The Soup is feeding you because finely crafted, quality material is on the table here.”

Many thanks to Mark Davison from Nuke The Soup who has an ample supply of CDs and terrific Nuke The Soup t-shirts for contests and on-air giveaways. If you need more info, call Andy Gesner at 732-613-1779 or e-mail us at info@HIPVideoPromo.com. You can also visit www.NukeTheSoup.com to find out more about Nuke The Soup.

For info about Nuke The Soup’s previous video, “Yin And Yang” click HERE