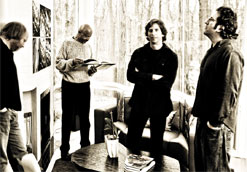 When the bombs drop, it has become an inevitability that the cameras and the coverage will begin to flow soon after. With fatigue jackets and helmets atop their perfect hair, anchors are there while back at the home base, panels of pundits are quick to discuss strategy. Not just of battle, but of how to make it all into a commodity.

Nuke The Soup’s Mark Davison first felt the blurring of lines between war and commercialism during the first Gulf War. Since then the line has been nearly blurred out of existence. Davison says “With so much commercialism, everything is a product for sale. We have become removed and calloused to real events and human tragedy by overexposure on TV.”

Their new single, “Network,” tackles this frustration with a cheeky but stinging examination of the state of society. Between lines about battalions, armies, guns for hire, ratings, and profits, it really is hard to tell whether one is listening to battlefield coverage or a conference call at a shareholder’s meeting.

In the new video, Davison playsa the part of both helpless consumer and puppet master. A wall of TVs captures the blow by blow of the battlefield, courageously covered by a fatigued field reporter (played by keyboardist/vocalist Brian Simms). From one angle, Davison is the sullen viewer slowly drawn in closer and closer to the screen. More numb than captivated, nothing really moves the needle as his consumption brings him one step closer to being consumed. Turn around, and Davison plays the part of the savvy pitch man, tossing two thumbs up, a whirlwind of commercials and punchy graphics for the viewer to ingest to score their fix. Lost amongst all of the frenzied coverage is the human toll that is quietly stacking up in the background.

“Network” is the first single from Deeper, a collection of songs that reveal Davison’s profound rock songwriting skill and meditates on mortality and its torments and joys. Accompanied by top notch talent like drummer Chester Thompson (Zappa, Genesis) and guitarist Gerry Leonard (David Bowie)–and produced by Kevin Killen (Bowie, Peter Gabriel, Kate Bush) and Brendan Canty (Fugazi drummer), Deeper gets heavy and thoughtful without ever getting dark. Like a good parent sneaking veggies into their kid’s pancakes, Davison crafts a pleasant musical vehicle to deliver a necessary bit of introspection.

t’s a blast to partner with Nuke The Soup to promote the video for “Network”! We’d love to see this video added into your cherished programming and online presentations in a timely fashion, so please check it out as soon as you can…you won’t be disappointed! Rest assured we’ll have plenty of Nuke The Soup merch available for on-air contests and giveaways, so don’t hesitate to get in touch. For more information on Nuke The Soup, please contact Andy Gesner and the HIP Video Promo team at (732)-613-1779 or email us at info@HIPVideoPromo.com. You can also visit nukethesoup.com for more info!

For info about other Nuke The Soup videos, click HERE.