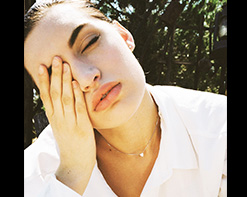 It was Joni Mitchell who famously likened the six strings on a guitar to the hexagram of the heavens from the I Ching.  But seen from the inside of the instrument, those strings look more like the bars of a cell.  “Mania”, the latest clip from singer and songwriter Nya, begins with the camera within the hollow body of an acoustic – and the young star framed by the circular sound-hole.  She’s a beautiful bird in a cage, jailed by circumstances beyond her control, and although she fights back, she never quite flies free.  By the end of the clip, it’s clear: the prison we’re looking at is Nya’s own unsettled mind. Yes, this is a darker, more gripping clip than the bittersweet carnvial reverie of “Let Go”, Nya’s breakthrough video. But then “Mania” is a much tougher song. This is Nya’s sound in its rawest and purest form – a drumbeat like a subway rumble, an insistent, irresistible guitar riff, and a fiery vocal performance that feels simultaneously classic and contemporary. The reflective, wistful tone of “Let Go” has been swept away; in its place, Nya brings heat, intensity, and danger. It’s a testament to this artist’s flexibility that both terrific songs exist, side by side, on the same five-song Mania EP.

Breadth of vision is uncommon in any artist; it’s particularly remarkable to find it in a musician as young as Nya is.  Yet it’s one hundred per cent genuine – and a hallmark of her promising career.  This is a pop singer who was inspired to pick up a microphone by old movie soundtracks, who cites Sinatra and Ella Fitzgerald as inspirations, and who understands blues and vintage rock and roll.  It’s no wonder her songs feel inevitable, grounded in history, even as she draws from hip-hop, R&B, soul, and electronic music.

Andrew Morris’s clip for “Mania” feels similarly elemental – stripped-down, raw, immediate, provocative. Without indulging in special effects, Morris generates a palpable sense of destabilization around Nya, a zone of trouble in which she’s confined. The mania she’s singing about has taken her over and driven her to the edge, and that mindstate is underscored by the strange world around her: the great guitar strings like metal bars, the hanging, swaying instruments, the cold light of distant windows. Only when she smashes the guitars – and there are some spectacular shatterings of six-strings captured on film here – does she step free of her shackles.

We’re thrilled to be partnering with Team Nya once again to champion the “Mania” music video. Nya is impossible not to root for and if there’s ever an artist to get behind before she makes it big, it’s Nya! This captivating artist is one that we’ve taken to with a profound passion here at HIP Video Promo. With a sound that bridges classics with the contemporary and a style that can’t miss, she is an artist you will want to get behind with your programming support! You can contact Andy Gesner and the HIP Video Promo crew at (732)-613-1779 or email us at info@HIPVideoPromo.com or visit www.THISISNYA.com for more info on NYA.

For info about other NYA music videos, click HERE