Okkervil River “Our Life Is Not A Movie Or Maybe” 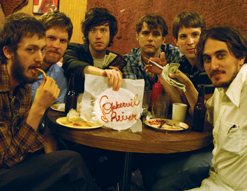 Hello music video lovers! It’s Andy Gesner and the tireless staff from HIP Video Promo returning with a must see video! Is there any band in indie music as well regarded as Okkervil River? It’s only been two years since the release of Black Sheep Boy, and the band’s staggering 2005 set is already considered a classic. Will Sheff’s passionately-penned examinations of abuse, betrayal, unrequited love, family, friendship, and authenticity prompted critics across America to place Black Sheep Boy atop year-end “best of” lists; the band’s relentless gigging in support of the album (including a heralded tour with the Decemberists) grew Okkervil River’s audience dramatically. An Australian-only EP release couldn’t begin to satisfy the demands of the band’s new fans – most of whom have discovered Down The River Of Golden Dreams and the rest of the band’s stellar, emotionally-raw back catalog – and anticipation for the proper follow-up to Black Sheep Boy has been burning up the underground for most of 2007.

Now it’s here, and it’s exceeded expectations. We can’t even count all the positive reviews for The Stage Names we’ve seen so far; suffice to say that if a publication covers music, chances are, it’s printed or posted an Okkervil River rave in the past few weeks. Pitchfork lovesThe Stage Names; Spin, All-Music Guide, and Entertainment Weeklyhave sung the praises of this resolutely independent band to mainstream audiences; The New York Times continued its strenuous advocacy of the group; hometown paper The Austin Chronicle called the album “the modern world, revealed”. But none of that has been as important – or as telling – as the overwhelming response to the songs on The Stage Names by independent webloggers, fans, and ordinary music listeners lucky enough to catch Okkervil River’s incendiary stage show. Billboard tells us that The Stage Names made its debut in the U.S. Top 100. Impressive for sure – but more importantly, we know that it’s #1 in the hearts of everybody who follows this group.

What’s the new album about? Life on the road for a modern indie rock band, voyeurism and pornography, the blurry line between fiction and nonfiction, kicks, illusions, “the scene”, the desperate need to connect, and much more. Sheff’s formidable intelligence and emotional generosity are in full force; meanwhile, years of energetic late-night performances have turned Okkervil River into a fierce rock outfit. “Our Life Is Not A Movie Or Maybe”, the lead track on The Stage Names, is an absolute fireball: the band crashes through the verses as Sheff howls about the ache of the mundane, and its refusal to conform to a narrative trajectory. “It’s got a calm clicking”, he sings of the clock on the mantelpiece, counting out the seconds, “like a pro at his editing suite takes two weeks stitching up some bad movie.” Once again, Sheff and the band prove that neither a cerebral approach nor a big vocabulary is any impediment whatsoever to rock and roll intensity.

In the hands of another Austinite – the talented Margaret Brown, director of Townes Van Zandt biopic Be Here To Love Me – the video for “Our Life Is Not A Movie Or Maybe” is a further revelation. Van Zandt would’ve understood why the members of Okkervil River rage so hard and write with such passion, and he certainly would have appreciated the iconography in this clip: seedy motel rooms, cigarette smoke, the detritus left after an overnight stay, grainy televisions, sex as performance, guitars and drums and the loneliness of the highway. But the best thing about the clip is the band’s own performance. Sitting around a motel bed, they hurl the song at the camera, playing with the incisive fury that has made their typical gig the hottest ticket in the indie rock underground.

Huge thanks to Jonathan Cargill and the staff at Jagjaguwar for bringing us on board to bring you this spectacular clip. We’ve got copies of The Stage Names on hand and the band will be touring the United States extensively this Fall, so please get in touch if you’d like either CD’s for on-air giveaways or if you’d like to meet up with the band for a video interview when they come to your market. Here at HIP, we are all about this band, and are fully prepared to fulfill any and all Okkervil River needs that may arise! If you need more info, call Andy Gesner at 732-613-1779 or e-mail us at info@HIPVideoPromo.com . You can also visit www.Jagjaguwar.com or www.OkkervilRiver.com to find out more about Okkervil River.