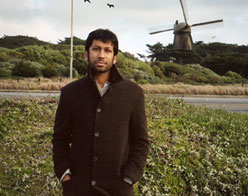 THE ONE AM RADIO

Hello friends and fellow music lovers! It’s Andy Gesner and the staff here at HIP Video Promo, hoping you’re staying cool and having a terrific summer. If you’re in need of a crisp, welcoming breeze right now, we’ve got just the thing for you: new music from The One AM Radio. The Los Angeles-based songwriter records quiet, shimmering, gently rippling indiepop songs – intelligent, romantic, impeccably arranged, replete with evocative images and gently understated performances. Assisted by violinist Jane Yakowitz, Hrishikesh Hirway, the singer and writer, creates inviting and mutable electronic soundscapes, rendered with a soft focus, edges blurry, dissolved in dreams. While Hirway’s smarts and deft hand with computer recording has earned The One AM Radio comparisons to The Postal Service, he takes more chances than Ben Gibbard and Jimmy Tamborello do. His commitment to musical exploration pushes this unique act closer to the territory stalked by the Notwist, The Blood Group, Lismore, and select other electro-pop and glitch-pop composers.

Critics have been wowed. The Hum of Electric Air, the 2002 debut, charmed and delighted reviewers from publications as disparate asCMJ, Punk Planet, and the venerable Rockpile. The heralded A Name Writ In Water caught the attention of Rolling Stone, where reviewer Kurt Orzeck praised Hirway’s “soft and bouncy beats” and “lush symphonics”. Pitchfork raved about The One AM Radio’s latest album, calling A Name Writ in Water “sweet and compelling enough to make your well-worn Nick Drake tapes feel curiously obsolete.” High praise, indeed. The secret to the group’s intimacy is the care with which Hirway assemble the sonic elements that make up his jewel-like songs. Each sound feels hand-crafted – perfectly stitched together and invested with great personal meaning and emotional force. (Continuing their interest in sonic experimentation, The One AM Radio recently released On The Shore of the Wide World, a collection of illuminating and occasionally surprising remixes of songs from A Name Writ In Water.)

“Witness” is a pivotal track on the album, and a perfect example of the Hirway’s illustrative skill. It’s an assembly of rich images, a romantic narrative of twilight mystery and startling levitation through a perfect urban landscape. Hirway sings of its fading light, streetlights buzzing to life, the curious stretch of shadows, and warehouse windows reflected in the eyes of the girl who has stolen his heart. There’s a hush over the song: a quiet glimmering, a privacy, softness and intimacy that captures the rush of young love. This is music for mix tapes – a song sent over wires from lover to lover, a digital transmission of quiet passion.

Michael Mohan’s lovely video for “Witness” opens a window for us into an unexpected date on the kickball fields of a city. Here, hip and adorable kids in their early twenties flirt, exchange jackets, play games, and share ice cream on the hoods of old automobiles. The central couple in the clip have been set up by friends – they’re awkward but anxious, exchanging glances and getting comfortable with each other as the balls fly around them. There’s something both beautiful and believable about their interaction, and the supportive angled glances of their friends. Mohan has coaxed fantastic performances out of his actors, who perfectly capture the tentativeness, insecurity, and exhilaration of meeting and dating within a crowd of like-minded peers. As the twilight fades to black, we’re treated to one final shot of Hirway himself, reclining against a fence, surveying his scenario with an amused and approving smile.

We are very excited to be working with Level Plane Records to bring you this lighthearted, yet compelling clip. We have plenty of copies of A Name Writ In Water for on-air giveaways so please get in touch if this act gets you excited. If you need more info call Andy Gesner at 732-613-1779, or email info@HIPVideoPromo.com.