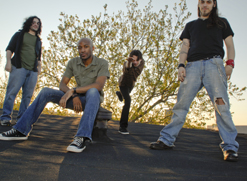 Hey, everybody, it’s Andy Gesner and the staff from HIP Video Promo, here to share a new clip from a Garden State combo with a bright future. Here at HIP, it’s been our great privilege to bring you music videos from all corners of the globe. But what’s hot right here in our backyard? Ask around the clubs of Hoboken and you’ll get your answer: One Word Song, a modern rock band with a radio-ready sound, a charismatic frontman, and energy to burn. The young group has already earned a well-deserved reputation as one of the most reliably entertaining acts on the NYC/NJ underground circuit – and in late ’08, One Word Song bested more than hundred other bands to reach the M.E.A.N.Y. Fest Finals.

And word has already started to spread beyond the New York metro area. Absolutepunk.net called I Can’t Be Trusted – One Word Song’s blistering debut full-length – the album Aerosmith would make if they were twenty-five years younger. A heady claim for sure, but the members of One Word Song are ambitious enough to make it feel more like a prophecy. Singer and guitarist Marquis McMichael writes candidly of heartbreak, yearning, time lost and ambitions fulfilled; he’s sharp-witted, observant, and engaging, and he’s won new fans wherever he’s played. Along with his band, he’s crafted a sound that merits comparisons to that of Thursday, Muse, Smashing Pumpkins, and Taking Back Sunday.

“Time Stood Still” is quintessential One Word Song: catchy, edgy, thought-provoking, and endlessly replayable. The song is a meditation on the nature of time and a wild wish to alter the clock – and as always, McMichael delivers his lyrics in his powerful, identifiable voice. Drummer Johnny “Rock” Roccesano hammers away like the second hand on a stopwatch, bassist Jonathan Wohl plays a subtle counterpoint to McMichael’s melody, and guitarist Dave Marcus contributes a lacerating six-string hook. The song is progressive in the truest sense: forward-looking and intelligent without sacrificing an ounce of the band’s accessibility.

They’re videogenic, too. McMichael is handsome and immediately-likeable, and he’s awfully comfortable in front of the camera. The members of One Word Song are naturals for music video, and we expect to see a long run of inventive spots from them; with the “Time Stood Still” clip, they’re off to a great and conceptually-sophisticated start. Director Rodrigo A. Orozco plays with time and expectations – and manages to tell a pretty romantic story in the process. The clip opens in a typical North Jersey suburban kitchen; there, McMichael and his girlfriend are breaking up. As she pulls her hand away from his, the clock on the wall stops short. Soon, both McMichael and his ex are shown with a succession of new boyfriends and girlfriends: some are caddish, some are fetching, but none of them feel exactly right. We know he’s discontent, and we also know why. Out at a club with a sexy young thing, McMichael breaks off the date suddenly, returns to his old girlfriend’s home, and joins the queue outside her door. Deeply nice, he waits his turn. He finds her at the same kitchen table where he left her, unmoving, the clock on the wall still paused. Finally he grabs her hand and she responds – and the second hand springs back to life.

We’re very excited be working with the team at Mind-Bending Pictures to bring you this thrilling new video. We’re stuffed full of One Word Song goodies, including copies of I Can’t Be Trusted for everything you may need to assure this video receives maximum programming! Give us a shout to get your hands on some! If you need more info, call Andy Gesner at 732-613-1779 or email us at info@HIPVideoPromo.com.