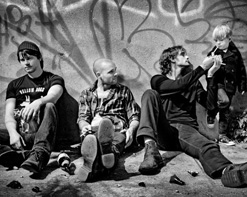 What ever happened to the power trio? Taking an elemental approach to rock music, these three-man outfits were the bands that turned up the volume, increased the musicianship, and changed the world. In the heart of our not-so-humble little state of New Jersey, there is a loud and unmistakable answer to that question – Only Living Boy. It’s Andy Gesner and HIP crew, proudly presenting you with a NJ outfit that put the power in the trio and unabashedly convert all those around them into the religion of rock and roll in “I Hear Music.”

“Only Living Boy eats raw hearts for breakfast,” so claims The Audio Perv blog in their SXSW feature on the band. This all killer, no filler three-piece have taken a hard walk down the path traveled by the greatest of the rock ‘n’ roll forefathers. On their self-titled debut in 2008, the band laid down the foundation for their sound by planting their blues rock roots firmly into the ground. Fusing modern rock music with a heavy blues base, Only Living Boy assaults with tight riffs served over nasty, hip-shaking, head-nodding grooves. They also followed it up with some tried and true touring across our great nation. Their sophomore album, Hide Nothing, which just hit the digital shelves, is produced by Paul Ritchie of Roadrunner recording artists (and fellow N.J. rockers) The Parlor Mob. This album finds the band meaner, leaner and louder, despite what their Simon and Garfunkel-inspired name might suggest. The Aquarian recently dubbed the record as comparable to newer Pearl Jam stuff in its bluesy quality and complemented the band on their “excellent songwriting skills.” Pop Break also boldly raves that Only Living Boy “have the tunes, the talent and the charisma to bring the power trio back to its rightful place of prominence.”

“I Hear Music” is a music video that shows off exactly what happens to any listener when they hear the heavy riffage of Only Living Boy. The clip starts in black and white as the boys jump into a moving pickup truck and race to town. On their way, the rockers encounter several townspeople who look like they might need a little face melting to spruce up their day. To remedy the situation, the band throws headphones at the bystanders, and as each listener puts them on their head, their life turns to color and their hips start to gyrate! A word of warning, folks: “I Hear Music” has a tremendous guitar solo that might be so Hendrix and hot, you’ll need gloves to remove the tape/DVD/file from your machine afterwards. There’s nothing like hearing a fat Fender buzzing and cutting through the mix in today’s world of bands relying on cheap synth tricks.

We love rock and roll, and we love Only Living Boy. If you’re a fan of one, you’ll be a fan of the other. Programmers, throw some shred into your playlists this October and November with “I Hear Music.” We’ve got copies of Hide Nothing for you to get your hands on, so reach out for any requests. If you need more info, call Andy Gesner at 732-613-1779 or e-mail us atinfo@HIPVideoPromo.com . You can also visit www.onlylivingboy.com to find out more about Only Living Boy and all the tour dates near you.