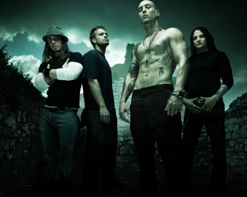 Greetings cherished programmers from coast to coast! It’s Andy Gesner and the staff from HIP Video Promo with a true eye opener of a video! Here at HIP, we always expect impressive things from our friends at Artificial Army (Thursday, Mars Volta, These Arms Are Snakes). But with the “Soulcrusher” clip for Operator, they’ve outdone themselves. The Army video production team has matched the California heavy band with an engrossing nightmare: a trip through a suggestive universe of sex, decadence, corrosion, and horror. In keeping with the subject matter of the song and the theme of the clip, they’ve crafted a rock video that could double as a hallucinatory movie short. It’s brutal, explicit, and violent, and it matches perfectly with Operator’s brand of hammer-fisted rock.

The sky over the dilapidated factory is slate-grey. High walls have caved in, and slant toward the center of the building at an impossible angle. Something nefarious is going on in there; it’d be apparent to anybody. The next thing we see confirms our suspicions: a hearse pulls up to the entrance of the building. A door opens, and a single stiletto-heeled boot hits the gravel. Leather-clad women – thin, arrogant, and suggestively underdressed – leave the cabin, pop the trunk, and extract a coffin with a number chiseled on the lid. Silently, impassively, they bear the casket to the factory door.

Operator also supplied Artificial Army with a genuine action hero. Vocalist Johnny Strong has more than rock grandeur on his CV: he’s also acted in several major-studio Hollywood movies, including Black Hawk Down. Strapping, muscular, and colorfully tattooed, Strong looks the part of a protagonist in a dystopian sci-fi flick. He’s also the perfect frontman for this group of daredevil rockers – fierce individualists and self-proclaimed “prophets of self-empowerment”.

Soulcrusher, the debut album by Operator, is an avalanche of rock fury, and a showcase for Johnny Strong’s brutal – but surprisingly consonant – vocals. Unlike many heavy bands who peddle defeatist gloom and willful misery, Operator is aggressively positive, kicking out at detractors and buzzkills alike and loudly proclaiming their independence and self-sufficiency. “Soulcrusher”, the lead single from the album, hits with the impact of a wrecking ball: it starts with a barrage of distorted six-string, and doesn’t let up until the final thunderous downbeat. Johnny Strong roars out his disaffection, addressing his broadside to an unnamed enemy (a betrayer?, a girl?, a representative of the state?) who personifies opposition and energy-sucking negativity.

That same defiance is on display in the “Soulcrusher” clip. It’s made manifest in the performance footage of Operator that’s interspersed among the sequences filmed in the factory – Johnny Strong’s microphone approach and stage presence are nothing short of commanding. And we don’t want to give away the surprise of the video, so let’s just say that when Strong makes his appearance in the abandoned factory, he announces his presence with authority. The song stops, an evil overlord issues commands to his leather-clad acolytes, and then Johnny Strong takes the opportunity to flex his not-inconsiderable acting muscles. (His not-inconsiderable pectoral muscles, too!)

We would like to thank Diane Van Horn and Jason Pleskow and all our friends at Atlantic Records for bringing us on board to promote another top notch video from an emerging Atlantic Records band. Operator’s full-length album Soulcrusher drops on July 3rd, 2007, and we’ll have plenty of  Operator CD singles on hand to set you up with for on-air giveaways and contests, so please be in touch if you’d like to set one up! Operator will also be touring the US throughout April and May, and we’d love to set you up with tickets to check ’em out! If you need more info call Andy Gesner at 732-613-1779, or email info@HIPVideoPromo.com. You can also visit  www.AtlanticRecords.com to find out more about Operator.