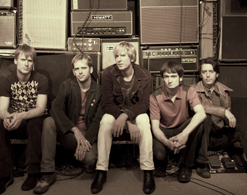 Howdy music video lovers, it’s Andy Gesner and the irrepressible staff from HIP Video Promo, here with the latest gleaming neo-psychedelic nugget from our friends at Rainbow Quartz. Few bands do British Invasion pop quite as convincingly as The Orchid Highway. Their self-titled debut is a compendium of Hollies-sweet melodies, Beatlesque riffs and harmonies, and eight-mile high experimental excursions reminiscent of Fifth Dimension. But The Orchid Highway is no museum piece – the production is powerful, the fidelity is immaculate, and the songs are performed with modern rock muscle. The band actually relocated to London; living and performing in the UK for a couple years. Then upon returning to Canada moved to the west coast; and spent subsequent years touring in a psychedelic painted bus. All classic experiences; and environments that bled into their songs. So yes – these influences came naturally – and were legitimately earned. These musicians are instrumental aces as well as scrupulous pop archivists, and their ears for pop hooks are unerring.

Take “Next World”, for instance. The Orchid Highway single is built around a mesmerizing guitar pattern, an irresistible beat, and a singalong chorus straight from Carnaby Street. Add in a hyperactive Wurlitzer electric piano, an elastic bass, and winning vocal, and you’ve got a track that’ll appeal to any fan of adventurous, energetic pop music. It’s just one of many irresistible cuts on the kaleidoscopic Orchid Highway –an album with shimmering surfaces and mysterious depths.

In their hometown of Vancouver, the members of the colorfully-named neo-psychedelic quintet are already stars: they’re regulars at the town’s hottest clubs, and Radio Bandcouver, the local left-of-the-dial authorities, has dubbed The Orchid Highway a “masterpiece”. The British Columbia city is, as many indie-music junkies know, a pop hotbed – and The Orchid Highway are a band respected by Vancouver rock royalty. Their mesmerizing stage show has won them fans all over the Northwest: in concert, the Highway manages to be simultaneously trippy and immediate, furious and approachable, ambitious and thrillingly familiar.

Filmmaker Robert Riendeau’s clip for “Next World” manages to convey much of the excitement that The Orchid Highway generates in a live setting. Riendeau captures the band in action in a tight studio, hurling their song at the camera with excitement and glee. They’re cool, to be sure, but their enthusiasm for this material is both palpable and infectious. And just as the music is reaching its climax, Riendeau’s camera begins to do its own acrobatics: the room shifts and spins, shakes, stands on its side, inverts, and turns upside down! Hot white light from the side of the stage floods the frames momentarily – and just as rapidly, the image snaps back into focus. It’s stimulating for sure, and it reinforces the mind-expanding elements of The Orchid Highway’s songs. But there’s another side to the band – and the group’s high-quality musicianship and astonishing attention to detail is communicated as well. The band plays in front of a mountain of fantastic vintage gear – tube amplifiers line the walls, and old analog synthesizers are stacked from the floor to the ceiling (and yes, they all belong to the band). Music aficionado: see how many you can name!

It is with great pleasure that we have teamed up once again with our old friend Jim McGarry and the crew at Rainbow Quartz to bring you this most excellent new clip. They’ve hooked us up with plenty of copies of The Orchid Highway’s self-titled full length, so hit us up if you’d like to get your hands on some of them for your on-air giveaways. If you need more info, call Andy Gesner at 732-613-1779 or e-mail us at info@HIPVideoPromo.com . You can also visit www.OrchidHighway.com to find out more about Orchid Highway.