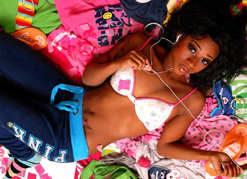 Howdy fellow music lovers! It’s Andy Gesner and the staff from HIP Video Promo, here with a new clip for one of the most irresistible urban contemporary tracks we’ve heard in a long time. Atlanta has given us its share of unusual R&B and hip-hop singers: Diamond and Princess of Crime Mob are from there, Erykah Badu has long been based there, Janelle Monaé made her name there. To this list of celebrated frontwomen we now add the name O’so Krispie. Everything that makes Atlantan music great is present in the singer-rapper’s exciting tracks: absurd catchiness, sharp production, flexibility, a willingness to take chances, clever incorporation of retro elements, good humor, vocal i.d., flash, vibrant color. And with the release of the delightfully-retro “Slumber Party”, O’so Krispie may just have come up with a song to scale the charts with

Krispie is no stranger to the public eye. Fans of primetime TV will remember her as the winner and star of R U The Girl, a reality show juried by T-Boz and Chilli of TLC. As the victor of the nationwide talent search, O’so Krispie won the right to appear in a featured role on TLC’s comeback single “I’ll Bet” – and to perform the song during the show’s finale. But even before rising to fame on R U The Girl, Krispie distinguished herself as an indie choreographer, and clips of her acrobatic, eye-popping dance routines are still in heavy circulation on video-sharing sites. Since the Girl finale, O’so Krispie has relocated to Los Angeles, collaborated with Chris Brown on the remix to “Poppin’”, and continued work on her anticipated debut album

Whether she’s singing or rapping, O’so Krispie’s style is unmistakable and characteristic: it’s conversational, friendly, energetic, hyped-up, articulate, approachable. “Slumber Party”, her latest single, is, among other things, a platform for her prodigious talents. As on “Roll With You” and the amusing “I Need A Boyfriend”, her first two solo cuts, the singer makes a solicitation to her audience; this time out, she’s skipping the clubs and inviting the ladies over for an old-fashioned gossip session and getdown. With its big beat, its Eighties-funk synths, its talkbox chorus, and its winning performance from Krispie herself, “Slumber Party” feels firmly in the tradition of sparkling leftfield summertime hits.

O’so Krispie busts out some of her famous dance moves in Scenario’s playful clip for “Slumber Party” – but she also spends lots of time atop the mattress on her big white bed. Amidst a shower of sparkling digital pixie dust, her friends arrive, and soon they’re all up in her bedroom, gabbing on cellphones and looking adorable in p.j.s and argyle socks. A pillow fight breaks out (of course), and since it’s all being broadcast via personal assistant, the boyfriends watching can’t help themselves from coming over. Before you know it, Krispie’s slumber party has turned into a co-ed affair – and nobody seems to mind very much. Scenario presents the “Slumber Party” video as a vintage clip from the Eighties: the introductory titles could have been taken from Solid Gold, and much of the story is told through an idiosyncratic visual frame. The upper left and lower right corners of the frame are filled in, and the action takes place in the diagonal slash between the two triangles. It’s a little off-kilter, a little loopy, a bit wonderfully off-balance, and it all matches the song perfectly.

We are elated to be working with Russ Castella and the folks at Bliss Entertainment Group on this fantastic new project. They were also kind enough to hook us up with a healthy supply of the album Slumber Party for all your on-air giveaway needs. So don’t hesitate to get in touch to nab yourself a copy from us! If you need more info, call Andy Gesner at 732-613-1779 or e-mail us at info@HIPVideoPromo.com .