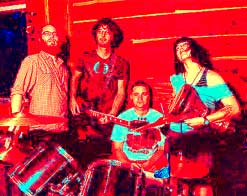 Hello friends, it’s Andy Gesner and the crew at HIP Video Promo, where we always champion innovative approaches to promotions and filmmaking. Somebody was bound to do it sooner or later — the ease of videomaking and video-sharing sites has expanded the possibilities of music video exponentially. But we’re thrilled to find that the first independent band to create an entire music video album has a terrific feel for the medium. There’s nothing perfunctory or expedient about Over The Hill’s The Album Is Dead; these aren’t quickly shot clips thrown up on YouTube for effect. These are intelligently-crafted, beautifully shot and animated in detail, and fundamentally interrelated music videos, all made in conjunction with some remarkably cinematic psychedelic rock.

Each clip on the The Album Is Dead was made by a different director, and each displays a slightly different take on Over The Hill’s incendiary, arresting sound. But as you’ll see when you watch the “Bella”, “Wickerman”, and “A Million Times” clips back to back, there are many intriguing connections between the spots. These similarities might not be immediately apparent: the clip for “Wickerman” is shot in stark black and white, “A Million Times” is animated in bold color, and the “Bella” clip combines both techniques in a riot of fluorescence. But look closer and the recurring signifiers are unmistakable — skeletons, masks, sci-fi, hallucinations, ghosts, the figure of death.

The videos are an essential component of Over The Hill’s project — Monofonus Press is famous in Austin, Texas, for their wildly-imaginative multimedia presentations. But these songs stand equally well on their own: they’re stunning slices of acid-drenched art-rock, vigorously performed by the quartet. These melodies sting, the production is seductive, and the choruses explode into sonic shrapnel. Vocalist Morgan Coy possesses the perfect psych-rock voice: it always sounds like he’s singing from someplace mysterious and unexplored deep inside your skull.

The Album Is Dead clips are similarly haunting — and similarly elusive. The video for “A Million Times” opens with the pull of a pinball plunger; suddenly, a placid blue-skinned guitar player is set adrift across a pink sky. As Coy sings about the inevitable encroachment of mortality, the blue-skinned voyager is spied on by a disembodied eyeball and skewered by a flying green monster carrying a spear. Memories of his life become a wheel, which then becomes a coin, which is inserted into the pinball machine to begin the cycle again. The hypnotic “Bella” gets an even weirder and more arresting treatment. The “singer” here is an old, bearded man who takes a slug from a bottle of beer before he begins. Soon, he is plunged into a grid that seems to have been pulled from a vintage computer screen and decorated with iridescent light. Throw in a sexy dancing girl (?) wearing a Darth Vader mask, levitating skeletons, and shattering glass and plastic, and you’ve got a hallucination likely to slink its way into your dreams.

The “Wickerman” clip is nowhere near as colorful or busy, but it’s every bit as trippy. The “singers” appear on the screen one at a time — for a few seconds apiece (these are not members of the band, who actually do not appear in any of the three videos, but rather members of a fellow Austin band). It all begins normally enough, but as the clip progresses, the musicians look increasingly distressed. By the midway point, the actors look haggard and beaten, clearly ready to expire; soon, they’re painted with zombie makeup. The film blurs, the musicians are hooded, the intoxicating nightmare intensifies.

We’re very excited to be working with the good folks at Monofonus Press to bring you this innovative and exciting new project. We’re here to hook you up with all things Over The Hill, so please don’t hesitate to be in touch if you need anything from us! If you need more info, call Andy Gesner at 732-613-1779 or e-mail us at info@HIPVideoPromo.com . You can also visitwww.MonofonusPress.com to find out more about Over The Hill.