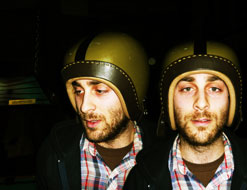 Howdy friends, it’s Andy Gesner and the staff from HIP Video Promo, here to share a winning new clip from a singer-songwriter skilled in the art of storytelling. Mike Kinsella — known to rock fans as Owen — has been making startlingly intimate recordings for more than a decade. A founding member of many well-loved Midwestern bands (including Joan of Arc, Cap’n Jazz, Owls and American Football), Kinsella has developed a characteristically warm, confessional approach that’s both immediately appealing and bravely literate. With Owen — the name he’s given to the recordings he’s done on his own — he’s often proceeded as a short-story writer would, crafting balanced narratives and developing characters who are instantly identifiable and wholly sympathetic. On No Good For No One Now, his heralded 2002 release, Kinsella set himself one rule: each song had to tell a tale.

New Leaves, his latest set, hews to no such restrictions. But if anything, the writing on the new album is even sharper and more keenly-observed. On “Good Friends, Bad Habits”, the lead single, Owen describes his associates as “literary romantics” and compares their habits to those of Wilde and Hemingway; they do no real harm, but they’re still thoroughgoing reprobates. Still, the singer is intrigued and attracted — petty larceny (and pretty faces) have seductive allure. As he always does, Kinsella brings this milieu alive with precise, suggestive language, each line carefully calibrated for maximum emotional impact.

The production on New Leaves is just as well-considered. Brian Deck (who has worked with the similar-sounding Iron & Wine), Tim Iseler, long-time collaborators Graeme Gibson and Nate Kinsella have decorated these songs tastefully, adding muted percussion and expressive synthesizer textures to Owen’s acoustic guitar. “Good Friends, Bad Habits” is a prime example of Owen’s expanded sonic palette: a modulating analog synth plays in counterpoint with a tasteful six-string weave. Those accustomed to his bare-bones arrangements will be pleasantly surprised at how gracefully he has managed to develop his sound without sacrificing an ounce of intimacy.

Joe Wigdahl’s sweet clip for “Good Friends, Bad Habits” makes that feeling of intimacy palpable. In it, Kinsella sits in the back of a typical mall photo booth and shoehorns himself into young couples’ shots. Some of his boothmates don’t even seem to notice he’s there, while others appear to welcome him. But no matter what they do, he keeps singing, peering into the lens as the camera flashes. He looks over his friends’ shoulders, ducks between kissing lovers, and does whatever he can to keep eye contact with the imaginary audience. And while his reserve contrasts with that of the booth’s visitors — many of whom make outrageous faces at the camera — he’s not above posing. His friends might have bad habits, but perhaps they’ remain his friends because he’s got some harmless ones of his own.

We are very proud to be working with the good folks at Polyvinyl Records to bring you this clip! If you need more info, call Andy Gesner at 732-613-1779 or e-mail us at info@HIPVideoPromo.com . You can also www.PolyvinylRecords.com orwww.MySpace.com/MyBandOwen to find out more about Owen.