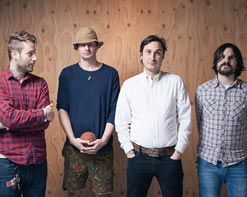 Much like another influential Mike Kinsella project, American Football, Owls had a short dance in the sun, but an influence that has reached far beyond their original time together. But whereas American Football is wowing us with their original material, Owls has taken it one step further and reunited the original lineup and brought us a new album and new music video for “I’m Surprised…”

Originally from Chicago, Illinois, Owls was an active band from 2001 throughout 2002, and reunited in 2012. Although it’s been over two decades since Tim Kinsella, Mike Kinsella, Victor Villarreal, and Sam Zurick formed Cap’n Jazz as teenagers, and 13 years since they followed up that band with their debut self-titled album under the name Owls, the members have kept active with a string of other endeavors, including Owen, Joan of Arc, Make Believe, and Ghosts and Vodka, that have never failed to showcase their diverse and ever-evolving musical aptitudes.

Owls reunited in March of 2012 and announced via Facebook that they had completed work on a new record after eighteen months of writing, and were heading into the studio to record their second studio album! Slowly but surely, the album Two was released in March, 2014; progress on the album was snail-like compared to the five days it took the band to complete their first self-titled record. However, one listen to Two will bear out the old adage that nothing good ever comes easily—it’s truly the kind of record that could only have been made by the hands of the four unique musicians who make up Owls.

Stemming from their reunion, Owls returned to the scene with their latest video clip “I’m Surprised…” Director Todd Mattei films each member of the band in isolation to present this spidery and intricate single. Often shrouded in the most dramatic of shadows, the bandmates soundtrack an occult card game. Although littered with spooky vibes, the vast array of confidence and multitudes of wholeheartedness make “I’m Surprised…” an utter delight.

Another must-see video from the Polyvinyl Records family, and one we couldn’t be more excited to be a part of! For more information please contact Andy Gesner and the HIP Video Promo team at (732)-613-1779 or email us at info@HIPVideoPromo.com . You can also visit www.PolyvinylRecords.com for more info on Owls.