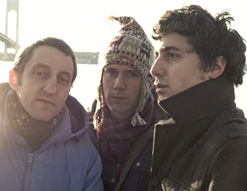 Hello friends, it’s Andy Gesner and the staff from HIP with a hilarious new clip from one of the most playful, irreverent, and infectious bands in the alt-rock underground. The first third of the latest Oxford Collapse video finds the band singing “Young Love Delivers” in front of the cooling towers of a nuclear power plant. Somewhere around the two-minute mark, the band declares this boring (in a partially-censored speech bubble superimposed over the footage, of course), and they begin to crash around the countryside in a DeLorean. This doesn’t satisfy them either – like most young rockers on a shoot, they’re hungry. The last third of the clip is all about hamburgers: making them, eating them, mashing them together into one big burger. By the end of the clip, they’re chasing after the car, guitars in hand, scarfing cheeseburgers as they run. Before they reach the speeding vehicle, the DeLorean turns into a rocketship and flies away. Oh, and this is all shot through a circular filter that dims the corners of the frames and distorts the faces of the musicians.

On one level, it is, as a voice-over confesses at the end of the clip, one of the worst videos you’ve ever seen. Approached in the proper spirit, though, it’s revelatory: refreshingly amateurish, subtly charming, edgy, and funny as hell. Understand the “Young Love Delivers” clip, and you’ll also know why the Oxford Collapse is one of the best-loved groups on the indie rock circuit. Their relaxed wit, fuzzy and inviting sound, and rough-edged but oh-so-memorable songwriting distinguishes them from their peers. Not many bands merit a legitimate comparison to mid-Nineties Pavement and GBV; this one does.

BITS, their latest, is a thirteen-song blast of everything that makes Oxford Collapse irresistible: guitar hooks, catchy melodies, intriguing lyrics, and deliberately understated performances by singer Michael Pace. “Young Love Delivers” finds Pace at his most animated – he hollers out the singalong refrain with his bandmates, and crowns it all with a delicious “whoa oh” release. It sounds live, and that’s just the way the band likes it. Brooklynites know all about the Oxford Collapse’s energetic stage set; thanks to a rigorous tour schedule, the rest of the world is catching on. Pace and his band recently swung through America with the Spinto Band and the U.K. with We Are Scientists, and this winter, they’ll be crashing through Germany, Italy, Spain, and Ireland.

The “Young Love Delivers” clip begins in typically old-school, lo-fi fashion: we watch a videocassette stuffed into a vintage VCR. (Just to let you know exactly where we’re going, “Back To The Future” is crossed out on the cassette label, and Oxford Collapse has been written in black Sharpie.) At the end of the clip, the “viewer” ejects the videocassette, throws it on the floor and destroys it with a hammer, and, for good measure, pulls it to pieces manually. In between, the three members of Oxford Collapse horse around as much as possible – chowing down on fast food, holding up placards with lyrics on them “Subterrean Homesick Blues”-style, jamming wildly in their practice space, and cruising aimlessly around the desert in the DeLorean. The whole thing must have been an absolute hoot to make, and the musicians look like they’re having the time of their lives. People who demand a million-dollar-budget for their videos, the overly squeamish, and those with no sense of humor ought to steer clear. Everybody else: welcome in.

Sub Pop does it again, and we’re always appreciative that we have the chance to be a part of their team. If you need more info, call Andy Gesner at 732-613-1779 or e-mail us at info@HIPVideoPromo.com. You can also visit www.SubPop.com orwww.OxfordCollapse.com to find out more about Oxford Collapse.