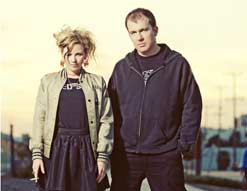 Greetings friends, it’s Andy Gesner and the staff from HIP Video Promo, here to brighten up your day with a song that looks forward to the hot months to come. It’s been nearly twenty years since Letters To Cleo released Aurora Gory Alice, and time has only deepened our appreciation for the band’s debut. It’s almost impossible to overestimate the influence of the set: it became the template for a generation of female-fronted pop-rock bands, and it established Kay Hanley as one of the most gifted frontwomen working in alternative music. Hanley’s alternately sweet and gutter-rough vocals gave Letters To Cleo an indelible identity, and epitomized sugar-spun pop-punk for a generation of listeners. When Universal Pictures needed a voice for Josie of the Pussycats for the 2001 movie of the same name, it was Hanley who they called. And while Letters To Cleo is now a distant memory, Kay Hanley has sharpened and refined her approach. Her latest project is called Palmdale, and we’re pleased to say it’s the brightest, splashiest, catchiest thing she’s ever done.

She’s had help. Her collaborator in Palmdale is Linus of Hollywood, a talented instrumentalist who has worked with The Charlatans UK, Smashing Pumpkins, Bowling For Soup, Puffy AmiYumi, and many others. Linus of Hollywood played all the instruments on Get Wasted, the group’s ingratiating lead EP, and his mastery of pop-rock orchestration is evident: he’s got the chugging rhythm guitar, the elastic, active bass, and the overdriven six-string leads down perfectly. “Here Comes The Summer”, the first single, is an irresistible slice of radio-ready, hooky power pop reminiscent of No Doubt, Liz Phair, and Weezer. Kay Hanley’s vocal performance radiates attitude and sex appeal. In time-honored pop-rock tradition, Linus’s guitar solo echoes the verse melody. And as befits a band named after a sunny Southern California city, the chorus backing vocals are heavenly.

Here’s another coup: the fetching Hanley looks just as good now as she did in 1983. In the “Here Comes The Summer” clip, she addresses the camera with the assurance of the longtime video star that she is. The Palmdale frontwoman represents her hometown of Boston and her power-pop heritage: half the time she wears a Fenway-red David Ortiz jersey, while in the other half she’s got on a vintage Cheap Trick t-shirt (meanwhile, Linus of Hollywood unironically sports a Saxon concert T.) Directors Heath Balderston and Jaret Reddick cast the pair as robbers and housebreakers, and set them loose in a Southern California suburban neighborhood. But there’s no urgency to their heists: in fact, after making themselves at home, they kick back on the sofa, make some popcorn, and get comfortable. The party is, inevitably, interrupted by the police, but not before Bill Nye the Science Guy makes a cameo appearance. It’s all loaded with personality and deeply Californian, and the outlaw joyrides down the Los Angeles avenues perfectly match the classic midsummer vibe of the track.

We’d love to hook you up with some copies of the Get Wasted EP for your listening enjoyment and on-air giveaways. We are very excited to once again be working with our friends at Oglio Records to bring you and exciting music. If you need more info, call Andy Gesner at 732-613-1779 or e-mail us at info@HIPVideoPromo.com . You can also visit www.Oglio.com orwww.WeArePalmdale.com to find out more about Palmdale.